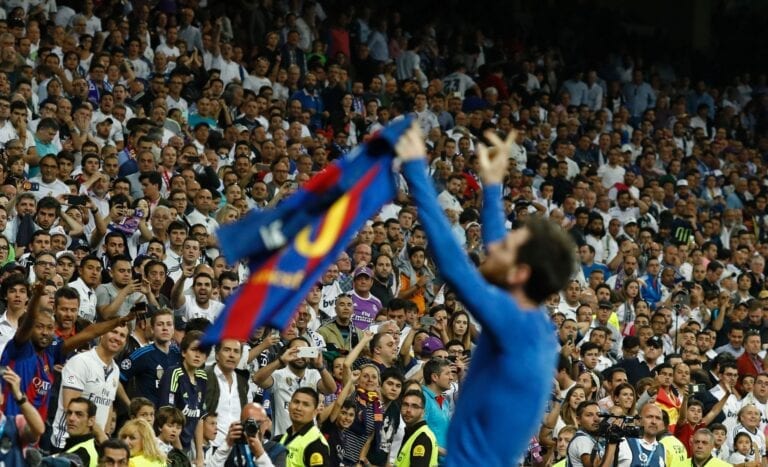 El Clasico has provided us plenty of great moments over the years.

From Cruyff to Messi, from Di Stefano to Ronaldo, we’ve seen some of the greats of football history turn out for Barcelona and Real Madrid.

This year, fans are on tenterhooks. Just two points separate Barca and Real in the LaLiga table, with league leaders Atletico Madrid only a further point ahead.

Come May, the result of El Clasico could have potentially gone a long way to deciding which team wins the LaLiga crown.

Here’s a look at 10 of the famous rivalry’s most unforgettable moments:

After yet another El Clasico goal – he scored 15 in total during his career – Raul decided to opt for a slightly different celebration at the Camp Nou back in 1999.

In what had been a typically fierce Clasico, Raul’s finish brought Real an 86th minute leveller after Luis Figo had put Barca 2-1 ahead early in the second half.

The Spaniard’s immediate reaction to scoring was to put his finger over his lips to ‘silence’ the Barcelona fans. A classic moment.

This was the famed trio of Messi/Suarez/Neymar at their absolute best.

Having assumed top spot of the LaLiga table the gameweek prior, Barca devastatingly took Real apart at the Bernabeu.

Luis Enrique’s side went into half-time with a 2-0 lead, Suarez and Neymar both having got on the scoresheet.

The Uruguayan marksman would make it a brace for himself late on, after Andres Iniesta had got in on the goalscoring action as well. 4-0 was an outstanding result, and it got worse for Madrid late on when Isco was shown a straight red card.

It’s not often you go too long without seeing some sort of mass brawl in El Clasico.

We got one before the LaLiga campaign even kicked off in 2011/12. This was the height of the Guardiola/Mourinho rivalry, with the two sides possessing some of the greatest talent in world football.

With Barca 3-2 up in the Supercopa second leg, however, and set to win the trophy on aggregate, everything descended into chaos.

It all started when Marcelo put in a shocking lunge on Cesc Fabregas, with the referee showing the Brazilian a straight red card. There’s then a mass confrontation between almost every Barcelona and Real Madrid official, with Mesut Ozil and David Villa also being sent off.

This was the first El Clasico on the European stage where the two titans of world football faced off.

Lionel Messi would come out on top over Cristiano Ronaldo this time, almost single-handedly helping Barca to the Champions League final.

His brace in the first leg gave Pep Guardiola‘s side a 2-0 advantage, before they sealed the deal with a 1-1 draw at the Bernabeu in the second leg.

The games were two of three Clasicos inside just 17 days. In the other clash – a Copa del Rey final nonetheless – Real emerged victorious.

It’s fair to say Luis Figo wasn’t the most popular man inside the Nou Camp when El Clasico came around in 2002.

Having signed for Real Madrid from Barca just two years earlier for a world record fee, the home fans were keen to make their feelings towards the Portuguese winger known.

That they did, throwing debris which included beer cans and lighters onto the pitch. When Figo came across to take a corner, a pig’s head landed near the corner flag.

Ronaldinho and Barcelona was football’s perfect match during the mid 2000s.

The Brazilian’s silky skills, outrageous technique and an ability for the spectacular won him two consecutive FIFA Player of the Year awards in 2004 and 2005.

He also rather enjoyed El Clasico matches. On one occasion in 2005, he scored two superb goals as Barca secured a 3-0 victory over their great rivals.

His second goal saw him race down the left wing, evading two challenges before slotting the ball neatly past Iker Casillas.

Such was the quality of his performance, Ronaldinho famously received a standing ovation from the Bernabeu crowd during the celebrations.

Johan Cruyff revolutionised Barcelona as both a player and as a manager.

When he joined Blaugrana as a player in 1973, the club hadn’t won a LaLiga title for 13 years. By the end of the Dutchman’s first season, they had secured the coveted crown.

Cruyff helped Barca to secure probably their most famous El Clasico victory in February 1974. It was a politically-charged encounter, with the Dutchman having previously refused to sign for Real Madrid because of their links to the fascist regime of Francisco Franco.

He moved to Barca from Ajax instead. His new side changed the landscape of Spanish football with one of the great team performances.

Cruyff got on the scoresheet himself and played an important part in a crushing 5-0 victory at the Bernabeu.

It’s an image that has done the rounds on the Internet ever since the moment occurred.

To this day, no-one quite knows how Lionel Messi managed to hold his famous number 10 shirt in such a way that created the iconic photo. But, after all, this is Messi. There seems to be no limit to what the Argentinian genius can do.

The goal that preceded the celebration was a 92nd minute winner, curled into the corner of the net by the man himself.

Sanchez lifts the roof off the Nou Camp with chip (2013) 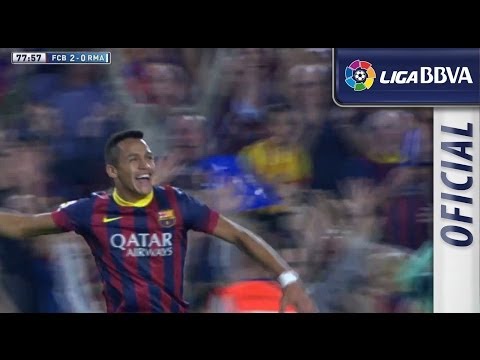 The greatest goal ever scored in El Clasico?

They don’t get much better than this. Latching on to a through ball from Neymar, Alexis Sanchez turns inside Raphael Varane before taking a touch and lifting the ball perfectly over Diego Lopez. An exquisite effort.

In the last El Clasico before stadiums were closed due to the COVID-19 pandemic, Vinicius Junior proved his worth on the biggest of all stages in Spain.

The Brazilian had only scored once prior to the historic fixture in March, but he put Real ahead in the 74th minute with a cool finish from close range.

Vinicius has gone on to greater heights since then, and is now an important part of Real’s side.