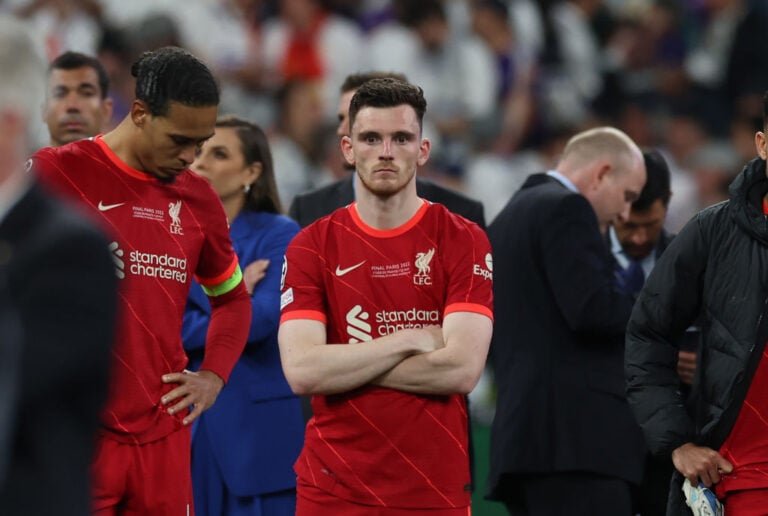 Liverpool defender Andy Robertson has criticised UEFA for the way they handled fans outside the Stade de France before Saturday’s Champions League Final.

With around 15 minutes to go until kick-off between Liverpool and Real Madrid, UEFA announced their decision to delay the start of the game by 15 minutes. They claimed this was due to the “late arrival of fans”.

UEFA then added another 15-minute delay, citing the same reason. However, eye-witness accounts painted a very different picture to UEFA’s.

What happened outside the Stade de France?

Many fans had, in fact, arrived several hours before kick-off.

Sky Sports chief reporter Kaveh Solkehol, who was at the game, has reported that French police attempted to funnel 20,000 Liverpool fans through a small gap outside the stadium.

This created what Solhekol described as a “massive bottleneck”, further impacted by French police parking vans across the walkway. Fans were forced to wait in the area for over two hours before being allowed into the ground.

After Liverpool fans got into the concourse, they were kept behind a gate for another two to three hours before being let into the stadium through only two turnstiles.

French riot police then started firing tear gas, Solhekol explained, through the gates and towards the area of Liverpool supporters.

Fans, journalists and other attendees were heavily critical of UEFA and the French police for their operation.

Speaking after the game, Andy Robertson revealed that one of his close friends had encountered further issues.

Before big matches such as the Champions League Final, players are given complimentary tickets by their club, which they can then give to friends or family members. Robertson gave one of his tickets to a close friend. However, officials claimed their ticket was fake when they arrived at the Stade de France.

Robertson explained: “My tickets were through the club. Someone told one of my mates he had a fake ticket, which I assure you it wasn’t because it was obviously through me.

“Then, obviously, the French police decided to throw tear gas on fans and families. It’s not been well organised.”

In addition to calling the organisation a “shambles”, the Scotland captain then revealed that many of the players’ families were involved, before slamming UEFA and the French police for their handling of events.

“You have to have some sympathy, because this was thrown on Paris kind of the last minute with all that has gone on with Russia,” he began.

“But, as a UEFA competition, it is the biggest game in world football, and it should be organised a lot better.

“Pretty much all our families were affected, I think. I can only speak for my family. All I know is everyone is safe, and that’s my main priority. I hope all the fans are safe.”