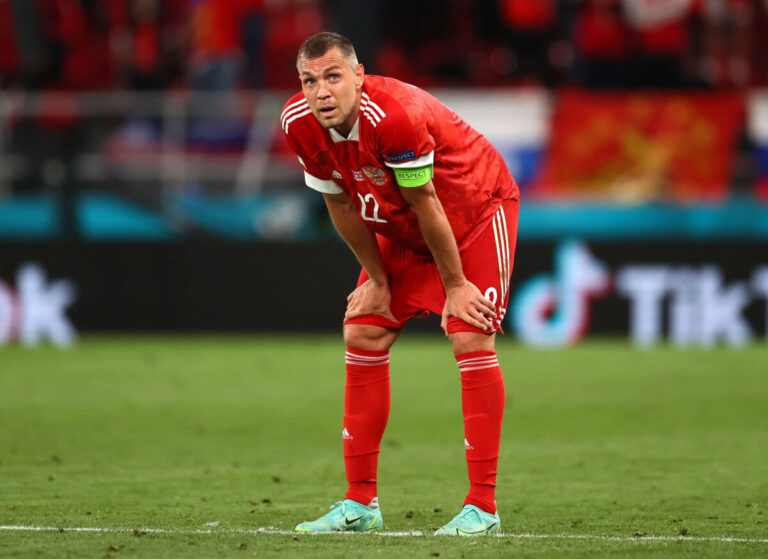 Russia captain Artem Dzyuba has responded after a social media post was made by Everton and Ukraine defender Vitaliy Mykolenko.

Mykolenko aimed his post at Dzyuba and the other players of the Russian national team after Russia invaded Ukraine last Thursday.

Footballing bodies have already taken action against Russia. FIFA and UEFA, for example, have banned Russian teams at domestic and international level from playing in their competitions.

Before that, several footballing federations confirmed they would not play any match against Russia. They included England, Scotland, Poland and Sweden.

Read: Poland say they will refuse to play World Cup qualifier against Russia

Several prominent figures from the Russian League have stepped down from their roles. For instance, former Norwich boss Daniel Farke has left his role as manager of FC Krasnodar. In addition, he had not taken charge of a single match.

Mykolenko was involved in an emotional moment prior to Everton’s Premier League fixture against Manchester City on Saturday. He shared an embrace with fellow Ukraine international Oleksandr Zinchenko.

Posting on Instagram on Tuesday, Vitaliy Mykolenko sent a furious message in the direction of Artem Dzyuba and his Russia teammates. He condemned them for being “silent” since Russia’s invasion of Ukraine.

The post is translated as follows: “While you b**** are silent, you and your s******* football players are killing peaceful people in Ukraine.

“You will be locked in your dungeon for the rest of your life and, most importantly, the lives of your children. And I’m sincerely glad about it. You will never be forgiven.”

He said: “I did not want to comment on the topic of events in Ukraine until the end. I didn’t want to, not because I’m afraid, but because I’m not an expert on politics. I’ve never been into it and don’t intend to.

“But, like any other person, I have my own opinion. Since I am attracted to this topic from all sides, then I will express it.

“I am against any war. War is a frightful thing. But I am also against human aggression and hatred, which is gaining some sort of devastating scale every day. I am against discrimination on the basis of nationality.

“I am not ashamed that I am Russian. I’m proud to be Russian. And I don’t understand why athletes have to suffer now. I am against double standards. Why is it that one can do everything, and they all hang dogs on us.

“Why has everyone always shouted about sports outside politics, but at the first opportunity, when it comes to Russia, this principle is completely forgotten?”

Dzyuba appears to hit out at Ukrainian players in England

Dzyuba continued his post. He appeared to hit out at the Ukrainian players currently playing in England, such as Mykolenko and Zinchenko.

“How much anger, dirt and bile has now been poured on all Russian people, regardless of their position and profession. Those thousands of people who write insults and threats, get in line!

“It is doubly strange to hear all this from people to whom Russia has given very, very much in their lives. All this only creates even more negativity. The war will end, but human relations will remain. And it will be impossible to rewind back. Keep this in mind.

“P.S. And to some colleagues in the workshop who sit on their ass in mansions in England and say nasty things: it cannot offend us, we understand everything! Peace and goodwill to everybody!”