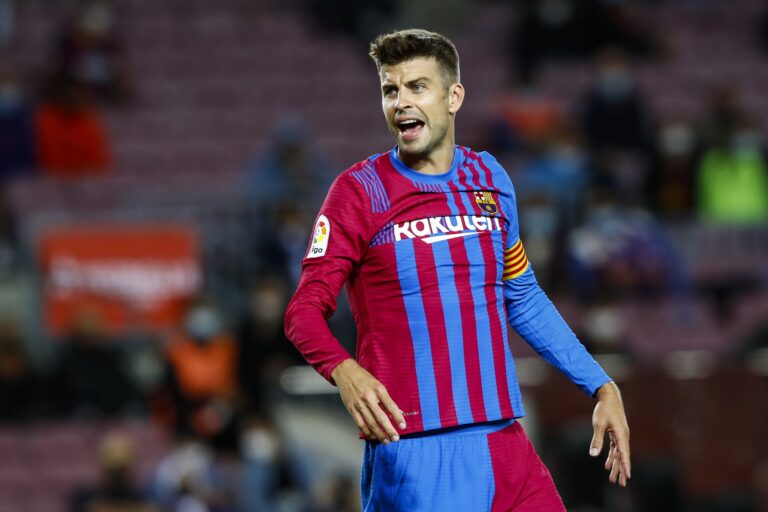 Barcelona fans went into meltdown as manager Ronald Koeman elected to put Gerard Pique up front in the closing stages of their 1-1 draw with Granada in LaLiga on Monday night.

With Barca edging towards their first league defeat of the season at the Nou Camp, Koeman made the decision to move Pique forward alongside Luuk de Jong in order to grab an equaliser – and perhaps a win.

They did eventually level the scores, with Ronald Araujo’s powerful header in the 90th minute rescuing a point.

But the tactical decision to place Pique up top with Luuk de Jong signifies how changed this Barca side is compared to 12 months ago.

Prior to last season, they would have had Lionel Messi, Luis Suarez and – when available – Ousmane Dembele to be able to influence a game late on.

But Messi and Suarez have since both left the club, and Dembele missed the Granada clash with a knee injury.

In addition, Sergio Aguero and young starlet Ansu Fati are both still absent from the squad, whilst Martin Braithwaite is also injured.

Add into the mix the fact that Philippe Coutinho is being eased back into the squad after a lengthy spell out through injury, and it is clear where Barca’s availability issues lie.

Still, the decision to push captain Pique forward didn’t go down too well with fans. The fact that Koeman’s side ended the game having attempted 54 crosses was pointed at.

After the match, Koeman defended his direct approach, and explained the decision to send Pique and Araujo up front in the closing stages.

He said (via Firstpost): “We changed our style a little bit. The changes were out wide, not in the middle.

“We went with Pique, De Jong and Araujo and from one of those crosses we got the draw.

“If you see the list of players, what do you do? Play tiki-taki? Tiki-taki when there are no spaces? We did what we had to do. We tried to win another way.

“We don’t have players one-on-one or with speed. We’re talking… I’m not going to say more because it seems I have to argue about everything.”