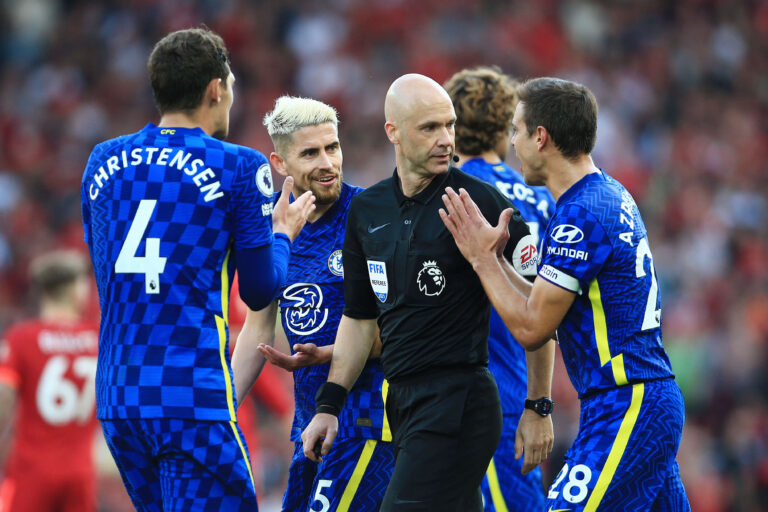 Chelsea have been charged by the Football Association with failing to control their players during their Premier League clash with Liverpool at Anfield on Saturday.

The incident in question occurred shortly after Liverpool were awarded a penalty for a Reece James handball and resulted in the Blues defender being sent off.

Blues goalkeeper Edouard Mendy was booked as a result of his appeals. Antonio Rudiger, meanwhile, was cautioned for attempting to scuff up the penalty spot.

The spot kick, which was scored by Mohamed Salah, was then shortly followed by a scuffle that involved several members of both sides.

Chelsea have now been charged with two counts of failing to control their players. They have until Friday to respond to the charge.

An FA statement read: “Chelsea FC has been charged with two breaches of FA Rule E20.1 following their Premier League fixture against Liverpool FC on Saturday.

“It is alleged that Chelsea FC failed to ensure its players conducted themselves in an orderly fashion during the 48th minute of the first half, and following the half-time whistle.

“Chelsea FC has until Friday to provide a response to this charge.”

Thomas Tuchel‘s side eventually left Anfield with a 1-1 draw, after Kai Havertz had put them ahead in the first half.

It was the German international’s first goal of the season. In addition, it was his first competitive club goal since scoring the winner in the Champions League final against Manchester City in May.

After the game, Chelsea boss Tuchel made his thoughts clear about the decision making that led to James’s sending off for handball.

He told BBC Sport: “I’m not sure anymore if it’s the rules or not the rules, if it’s correct or not correct.

“We had the impression the referee was only checking an image from the handball and it was very clear.

“He maybe would have changed his mind if he saw the whole situation, a deflection in moving pictures.

“We’ve heard the explanation from referees that it’s not going to be punished if it’s a deflection and not a very unnatural arm position.”

Chelsea captain Cesar Azpilicueta said: “He [Taylor] went to the screen to watch one replay.

“We got the double punishment – red card and a penalty – and two yellow cards in the same action.”