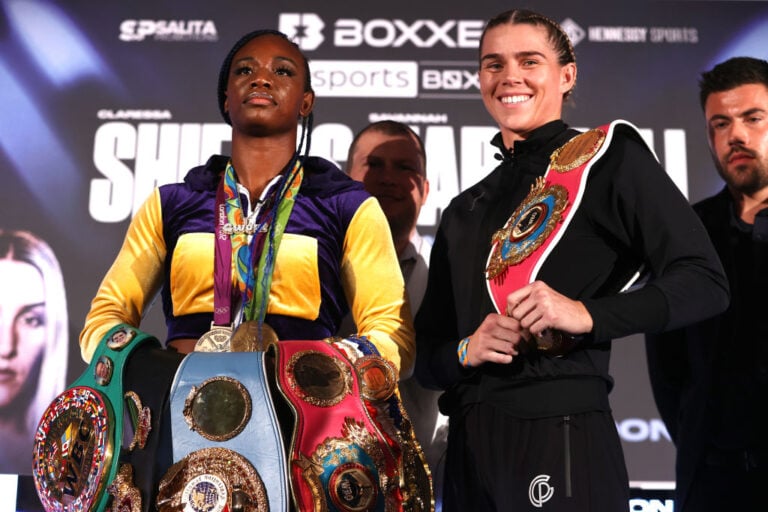 On Saturday night, Claressa Shields and Savannah Marshall go toe-to-toe in the biggest fight in women’s boxing history. And we’ve got all the details you need, including the UK start time.

Ten years after the two sporting icons met in the amateurs, they will set foot in the ring once again, and this time, the stakes are significantly higher. The first time the pair collided, the Brit walked away with the victory. But in the years that followed, their careers took completely different trajectories, while Shields won two Olympic gold medals, Marshall succumbed to the pressure.

However, after turning professional, the Hartlepool sensation came into her own. She teamed up with Peter Fury, who carved her into a power punching machine. Slowly but surely, Marshall catapulted up the rankings en route to winning the WBO Middleweight Championship.

And luckily, the woman who’s she’s feuded with for over a decade has also achieved a great deal in the pro-ranks. The self-proclaimed ‘GWOAT’ has solidified her place in the history books by becoming an Undisputed Champion in two weight divisions.

Consequently, the fans’ clamours to see the rematch became too rife to ignore. And now, the two boxers are set to meet at the O2 Arena in a fight that will undoubtedly define both of their careers.

Whether they like it or not, Shields and Marshall have been tattooed into each other’s lives. Their entire boxing journeys have led to this one moment, in which one will celebrate the most significant moment in women’s boxing history, while the other will have to surrender themselves to the harsh reality that their rival will forever hold the bragging rights.

Fans can tune into the undercard from 7:30 PM, with the main event scheduled to take place at 10 PM.

In an era where most big fights end up on PPV, boxing heads will be delighted to find out that this weekend’s blockbuster is on regular Sky Sports. Fans can watch every second of the evening’s entertainment via Sky Sports Main Event and Sky Sports Arena

In a contest as evenly matched as this, it’s difficult to pick a winner. On the one hand, Shields has achieved significantly more and undoubtedly has superior skills. But she’s never faced anyone with pop in her punches like Marshall. The 31-year-old has the power to render her opponents unconscious with a single blow, and you’ll think, at some point, she’ll find a way to land.

Therefore, to win, Shields will have to potshot her way through a minefield and hope her adversary gets tired in the later rounds. Without question, Shields has the mental fortitude to get the job done, after all, she thrived at the Olympics, whereas her nemesis crumbled. But under the tutelage of Peter Fury, the North-East girl has improved in every aspect.

The two-minute rounds definitely play in ‘The GWOAT’s’ favour. But regardless, we’re expecting Marshall to get the job done.

On a historic night for women’s sport, the bill will feature a full female line-up. And while most are counting down the minutes to the headline attraction, there are some cracking fights for combat sports enthusiasts to get their teeth sunk into.

In the co-main, Mikaela Mayer clashes with Alycia Baumgardner in a massive unification. And the pair of Americans despise each other just as much as Shields and Marshall.