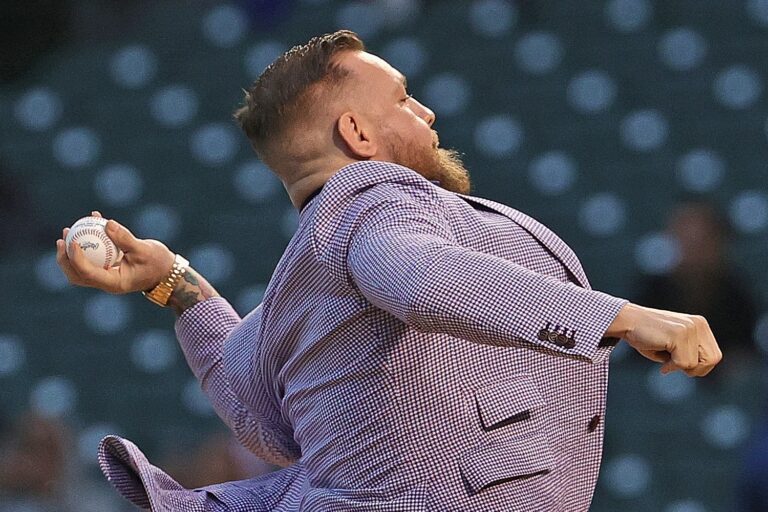 Conor McGregor is good at a lot of things – but throwing out the first pitch at an MLB game simply isn’t one of them.

It’s become tradition over the last few decades for celebrities, or other athletes of note, to throw out the first pitch at Major League Baseball games. Some have done well whereas others have flopped with fans often taking great joy in analysing the performance of those who step up to the plate.

We all know Conor McGregor is one of the most confident men to ever step foot inside the UFC cage and one of the most vocal in all of mixed martial arts. Alas, while he may be a former two-weight champion in the promotion, he certainly isn’t going to translate those skills over to baseball anytime soon.

Stick to the day job

As the Chicago Cubs were preparing to take on the Minnesota Twins yesterday we saw McGregor test the waters with a throw that, to put it nicely, highlighted his “power” – which was the same kind of description “The Notorious” gave when asked about the pitch.

“The most devastating first pitch ever seen in the iconic Wrigley Field! The venom is there, the power is there. It’s a little off accurate wise but I’m on the one leg – I’m happy with that, I’ll take that on board! If you could measure the power difference I bet there isn’t much difference between mine and theirs out there. If that was on target we would’ve had a problem!”

It’s not the first time we’ve seen McGregor make headlines for his work in other sports after sinking a nice basketball shot at Madison Square Garden in 2016 before attempting an unusual Hail Mary at a Dallas Cowboys game in 2018.