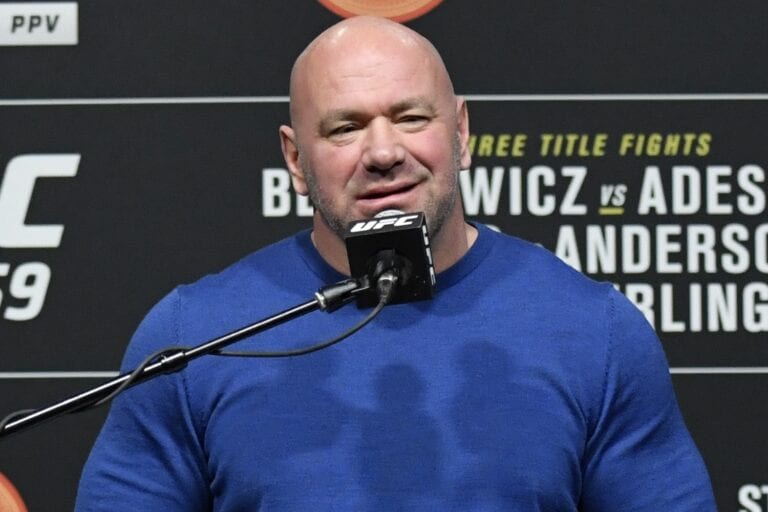 UFC president Dana White won’t give up in trying to lure Khabib Nurmagomedov out of retirement.

‘The Eagle’ officially hung up his gloves in the wake of his win over Justin Gaethje at UFC 254. Ever since then, fans have wondered whether or not he’d stick to his word.

Many believed, and still do, that he’ll stick to his original plans to step away from the sport.

Despite that, White is refusing to accept the permanence of Khabib’s choice, despite having previously sounded pretty downbeat about any potential return.

After meeting with Khabib back in January, White suggested it was unlikely we’d see the fighter return, White will once again be reconnecting with the Russian sensation in the hope that he’ll change his mind.

During the UFC 259 pre-fight press conference, Dana explained his reasoning behind the situation.

“We’re going to have dinner on Saturday or Sunday and just talk and see,” White said.

“I think a lot of these fights have to play out in the lightweight division. From No. 9 all the way up to No. 1, they’re incredible fights. You can mix or match them any way you want and they’re really good fights.”

“Let some of these play out to see who will fight next for the title,” White said. “I think if Khabib is interested, he’ll take the fight. You don’t see Khabib saying, ‘Leave me alone. Stop asking me.’ So there’s still a chance. That’s the way I look at it.”

White’s latest comments seem far more positive about a comeback materialising than we’ve heard recently, so maybe he knows something the rest of us don’t.

If it does, you can expect fireworks regardless of who Khabib faces in his push to reach 30-0.