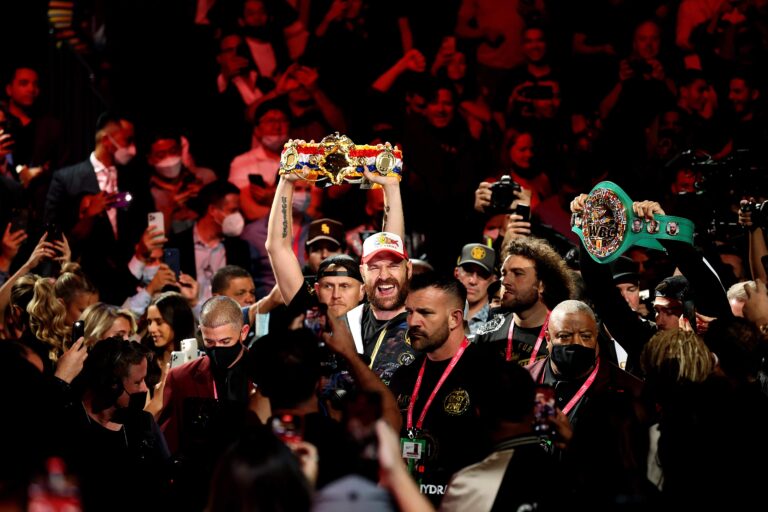 Dillian Whyte says he hopes the WBC “forces” Tyson Fury to face him in a heavyweight title fight if he can defeat Otto Wallin later this month.

Whyte is currently the WBC mandatory challenger and interim heavyweight champion. He has held the title since March after beating Alexander Povetkin.

He will defend his newly-won title for the first time against Swedish fighter Wallin on October 30 at the O2 Arena in London.

Victory for the Brit would put him in line for a fight against Fury, who successfully defended his WBC, The Ring and lineal heavyweight titles against Deontay Wilder in Las Vegas on Saturday.

Speaking to Sky Sports News, Whyte says he is looking at fighting Fury in the future – and wants the WBC to ensure it happens if he defeats Wallin.

He said: “Fury has the belt. Wilder [as champion] had the chance to fight me for three years but didn’t.”

“Hopefully now the WBC forces my position and Fury has no choice. It’s a massive British fight, a major fight for Britain.”

“Fury is an unpredictable man who might say: ‘I am done!’. I hope we can make a fight when I get past Wallin. But Fury is a difficult guy to plan. I haven’t heard a word from him about making a fight.”

He added: “I am definitely looking at fighting Fury.”

“Wallin is a dangerous operator – he pushed Fury all the way. I am looking to fight Fury next if everything goes to plan.”

“I’m always up against it, I’m always in hard fights. I’m used to it. I could pull out of the Wallin fight just to fight Fury but that isn’t my mindset. I can’t wait around for what Fury is doing.”

“My mindset is that I’ve got nothing to lose. I’m not scared to take risks. They see danger in fighting me. I will risk it all, if need be.”

Fury promoter on next fight

Fury’s co-promoter Frank Warren stated that he wants to stage his fighter’s next bout in the UK, and prefers either the Emirates Stadium or Old Trafford.

He added that Fury would “happily fight” Anthony Joshua – but his fellow Brit is set for a rematch for new heavyweight champion Oleksandr Usyk.

He told Standard Sport: “Tyson would happily fight Joshua but it looks like the Usyk rematch is on. I don’t see Joshua winning that – it’s Usyk again for me – but that doesn’t mean the Joshua fight can’t happen. It’s a fight people want to see.”