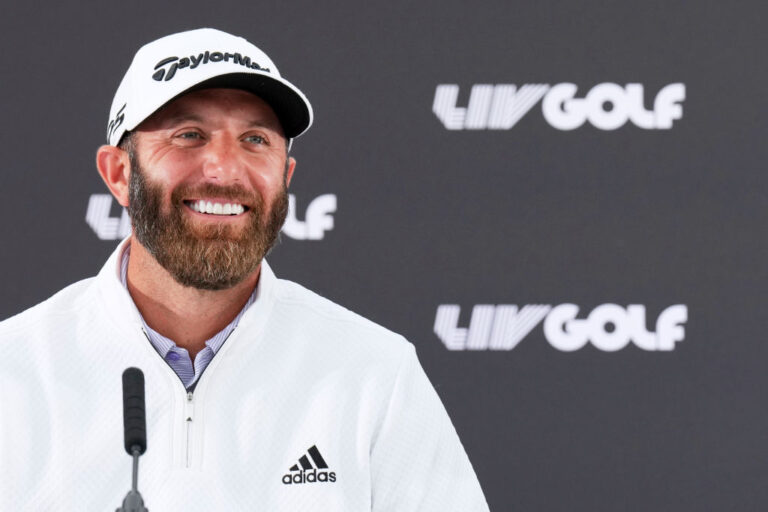 Following his recent sign up to the LIV Golf Invitational Series, we took a look at the net worth of former golf world number one Dustin Johnson.

Dustin Johnson shocked the golf world when he announced he would be resigning from the PGA Tour to play in the LIV Golf Invitational Series.

The Saudi-backed tour promises significantly more money than the PGA Tour and has been hit with a lot of controversies since it was first floated. Many within the sport believe that it is a move that mirrors that of the European Super League, which shocked football to its core just over a year ago.

By resigning from the PGA Tour, Johnson also relinquishes the opportunity to feature in the Ryder Cup. This doesn’t appear to have phased the former Masters and US Open winner.

The 37-year-old is reportedly receiving $125 million to play in the LIV Series.

The 37-year-old is highly regarded among his fellow professionals. Johnson won the US Open in 2016 and the Masters in 2020, being named PGA Tour Player of the Year for both of these years.

In addition, he has spent a remarkable 135 weeks as world number one.

Johnson also has a lot of experience in the Ryder Cup, being on the winning side on two occasions.

What is the net worth of Dustin Johnson?

According to Celebrity Net Worth, Johnson is worth an astounding $50 million. He is predicted to have earned $70 million in tournament prize money over his career to date.

The two above Johnson are Tiger Woods ($120 million) and Phil Mickelson ($92 million).

The 37-year-old was reported to have bought a $4.95 million property in Florida in 2015. It was also reported that he sold a property in North Palm Beach for $3.825 million.

Another report stated that Johnson had bought another Florida property worth $2.9 million the following year.

What are Dustin Johnson’s endorsements?

Among Johnson’s sponsors are adidas, BodyArmor, and Hublot. His most famous partnership, however, is with TaylorMade.

According to Forbes, the American was the 20th highest-paid athlete globally for 2021. In January 2021, Johnson extended his deal with TaylorMade.

The deal’s value is not public, but Rory McIlroy’s contract with the brand in 2017 was worth $100 million. This indicates how much Johnson may receive from his deal.

Has Dustin Johnson been involved in any charity work?

The golfing icon set up the Dustin Johnson Foundation to offer opportunities for young people to play, learn and contend. Furthermore, Johnson wants to help those less fortunate to get a start in golf.

They provide scholarships and lessons to break down barriers to those who may not know how to get into golf.

In addition to his own foundation, Johnson joined McIlroy in 2020 to compete in a $3 million charity match. Proceeds from this event went to COVID-19 relief.