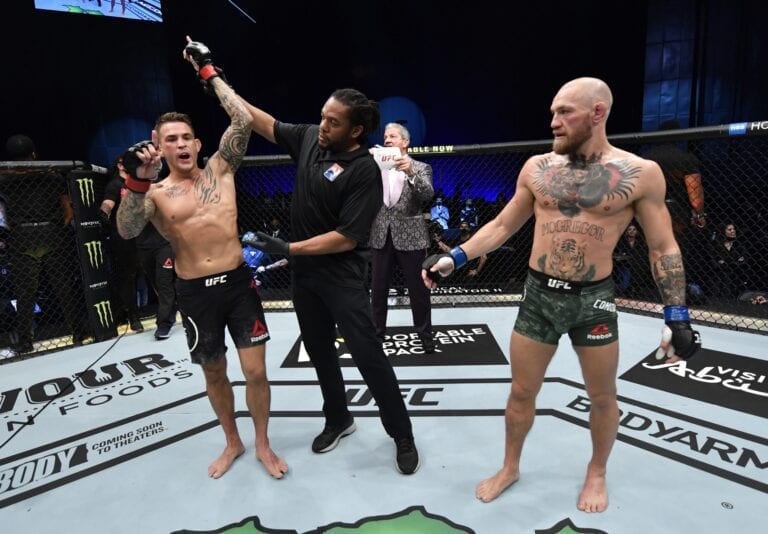 Dustin Poirier has agreed with Khabib Nurmagomedov’s prediction regarding what will happen in his trilogy fight against Conor McGregor.

“The Diamond” is currently in the midst of fight week as he prepares to fight “The Notorious” Conor McGregor for the third time – just six months on from their initial rematch. On that night in Abu Dhabi, it was Poirier who got the better of the two men with a vicious knockout win, setting the stage for what we all hope to be a rubber match for the ages.

Back at UFC 242 in September 2019, Poirier also went toe to toe with now-retired Khabib Nurmagomedov. “The Eagle” won the bout via submission and fought once more against Justin Gaethje before retiring, riding off into the sunset with an unbeaten 29-0 record.

In the build-up to Poirier/McGregor III, Khabib was asked to give his prediction for what could go down at UFC 264.

“It’s the same thing as the previous fight. If it’s a first round finish, I’d back Conor. From the second and further, then Dustin wins.” He explained.

During a recent interview with SportsCenter, Poirier gave his own version of what he believes will happen.

“I think with any fight, not just Conor, if it stretches out, I start getting my rhythm, my timing and it’s bad for anybody,” Poirier said.

“I really believe that I’m one of the best lightweight fighters in the world and the longer I’m in there, the more comfortable I get and the worse it is for my opponent.

“A lot of people bring up Conor’s cardio, they think he might not last in the fourth and fifth round but I don’t even think about that stuff in camp.

“I expect this guy to push the pace for 25 minutes, we’ll find out Saturday night if we get to that point, but I expect the best from my opponent. “But I just know the longer the fight unfolds and blossoms, if you will, I will be the better fighter.”