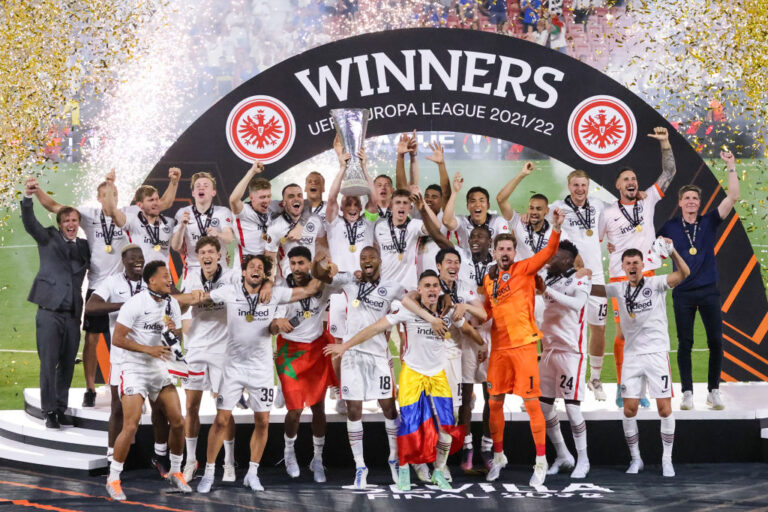 Eintracht Frankfurt and Rangers fought out a dramatic Europa League final on Wednesday night. The German side won on penalties in Seville after the sides were locked at 1-1 at the end of extra time.

Frankfurt won 5-4 on penalties after Aaron Ramsey missed his spot-kick. Rafael Borre, who had drawn the German side level in normal time, fired home to win the trophy for Frankfurt.

How the match played out

Both sides came into this match with big wins behind them. Frankfurt had eliminated both Barcelona and West Ham on their way to the final, but Rangers had knocked out the likes of Borussia Dortmund and RB Leipzig.

After a closely-fought first half, Rangers took the lead in the second, through Joe Aribo. However, Borre drew Frankfurt level with just over 20 minutes left to play.

Both sides had chances to win the match too. Borre had more opportunities, while Ryan Kent saw a close-range effort saved in extra time. Had Kent scored, Rangers surely would have won the trophy.

The match went to penalties. With the sides locked at 3-3 on penalties, Aaron Ramsey stepped up. The Welshman saw his shot saved by Kevin Trapp.

Eintracht scored their final two spot kicks to win the Europa League; the first German team to do so since 1997.

After their triumph, Eintracht Frankfurt delivered a classy message to Rangers. The German side took out a full-page ad in the Scottish newspaper the Daily Record to say thank you to their opponents.

The page, which had the headline “Rangers, it was an honour for us!” reads as follows:

‘You were a fantastic opponent with your countless fans. Together we showed how football should be! Emotional, passionate, and fair. Greatness is revealed in defeat, especially in such dramatic fashion. Just like 62 years ago: you are a great club! See you soon. Bring home the Cup win this weekend! You deserve it.’

Today, Rangers take on Hearts in the final of the Scottish Cup. The match at Hampden Park is an opportunity for Giovanni van Bronckhorst’s side to put their Europa League defeat behind them and win some silverware this season.

Kick-off is scheduled for 3pm.

Rangers finished one place above third-placed Hearts in the Scottish Premiership this season. However, van Bronckhorst’s side had an 18-point lead over their cup final opponents.

The Gers beat arch-rivals Celtic in the semi-final so will be confident going into this one. Yet it’s worth noting that Hearts defeated last year’s runners-up Hibernian in the semis.

Regardless of the outcome, Rangers will go into today’s final with the support of Eintracht Frankfurt behind them.