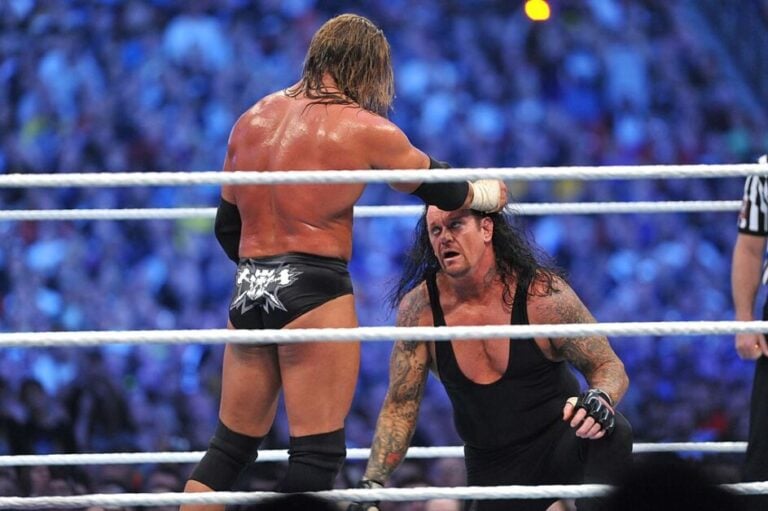 The Undertaker has perfected various gimmicks throughout his legendary WWE career, and featured in many memorable storylines – but there is one intriguing angle that he never got to take part in after a remark from Triple H.

‘The Phenom’ is known for taking on and defeating some of the greatest names to grace the industry. He engaged in memorable rivalries with the likes of Hulk Hogan, Ric Flair and Shawn Michaels.

His WrestleMania streak is infamous. It lasted for 21 incredible matches before Brock Lesnar defeated him at WrestleMania 30.

Read: How Undertaker reacted to plans for Brock Lesnar to end his Streak

The Undertaker eventually bowed out from in-ring competition in 2020 after a Boneyard Match against AJ Styles at that year’s WrestleMania.

He returned to his old ‘American Badass’ gimmick for the match in question. It was a biker gimmick that drastically moved away from his demonic character.

During his run as ‘The Deadman’, The Undertaker rarely cut promos and didn’t give too much away about his character. The mystique was what him made so terrifying and left fans captivated.

Fans eventually learned more about the character following the introduction of his on-screen half-brother, Kane. Then there was the legendary Paul Bearer, who was revealed to be Kane’s father.

But the man billed from Death Valley gave fans little insight into his background in the way that other WWE Superstars tend to do.

However, former WWE creative employee Freddie Prinze Jr has revealed that the company wanted to introduce a new member of Undertaker’s family, only for the idea to be shot down after a remark by Triple H.

The Undertaker could have had a son in WWE

Prinze Jr, who worked with WWE during two separate stints, explained that the company had a plan for Undertaker’s ‘son’ to run a short program with his on-screen father. The wrestler in question was called Hade Vansen.

In typical Undertaker fashion, the story would end with ‘The Phenom’ attacking his son in the ring before moving on to fight Edge.

Prinze Jr does not give a specific timeframe for when the angle was proposed. However, it was likely between 2007 and 2008 when Undertaker and Edge were involved in a memorable feud.

Speaking on his podcast, ‘Wrestling with Freddie‘, Prinze Jr explained the plans: “We received a note from Vince [McMahon] that said Undertaker needed an opponent to go through before the next PPV storyline. Someone had got hurt. I can’t remember who.

“Before we could get Taker to Edge, they wanted someone they could just run through. But they wanted us to have it be someone that could mean something.”

He continued: “We’re kind of spitting ideas around, and nothing’s clicking.

“I don’t remember who said it, but one of us said, ‘What if he claimed The Undertaker was his father?’ Somebody else said, ‘I don’t think anyone will buy that, but maybe it could be like in a supernatural sense’.

“He’s getting killed anyway. He’s getting smashed up. Yes, it would be a father killing his son, but he’s not really killing him. I mean smashing him in the ring.”

Triple H wasn’t a fan of The Undertaker angle

Prinze Jr went on to add that The Undertaker’s ‘son’ had impressed during promos. McMahon approved the angle, and WWE even got as far as filming the segments for television.

However, Triple H didn’t seem so keen on the idea, and McMahon cancelled it following a backstage remark.

He explained: “We’re in the production meeting, and everyone’s putting their segments through. Here comes our segment, and nobody said boo the last two weeks or even three weeks of TV that we got out of it. Not one agent. Not Kevin Dunn, not Vince, not anybody.

“Vince goes, ‘What do you mean? What’s the problem?’ He says, ‘He looks like he cuts my grass, man’, and Vince laughed.

“Literally, all the air went out of the room. Like you could just feel it. Because now it’s embarrassing for the company, well, at least from my perspective. You put something on TV for three weeks, and then you remove it with no explanation, there’s no way you can do that. Like that doesn’t happen on any show.”