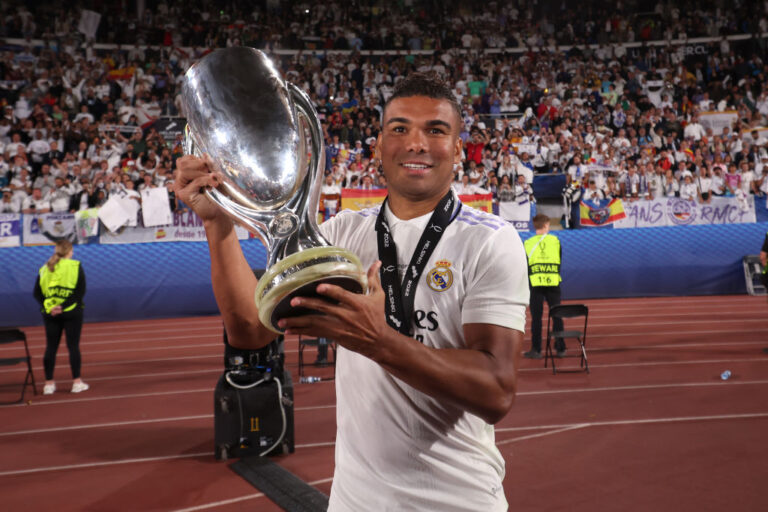 Casemiro has almost arrived at Old Trafford, and fans are getting so giddy that they’ve found two secret meanings behind his new shirt number.

After a long wait, Manchester United have finally reached an agreement to sign the midfielder they’ve craved throughout the transfer window, after a long pursuit of Frenkie de Jong.

The club departed with €60 million to secure the services of Casemiro. He has agreed a four-year, £350,000 a week deal.

Since the retirement of Sir Alex Ferguson, the former greats have spiralled into the abyss. But Erik ten Hag has made it his mission to guide the club back to the top of the footballing pyramid. And to do that, he needs players of Casemiro’s quality.

During his time at Real Madrid, Casemiro established his winning mentality by playing a pivotal role in the side. His physical strength, passing ability and outright will to win have made him an asset that United supporters can’t wait to have at their club.

However, while football enthusiasts await his official unveiling, they’ve taken to the internet to post some pretty interesting ideas as to why he’s received his the number he has.

Since rumblings of his signing began, fans eagerly awaited to find out what would be on the back of his jersey. And they’ve not been disappointed. Casemiro, quite fittingly, is set to wear the number 18 shirt, the same one that Paul Scholes made so famous.

The United faithful have already begun comparing the two players. They hope that the Brazilian can produce performances reminiscent of the Premier League icon.

However, this isn’t the only coincidence surrounding the number.

Casemiro’s spell with ‘La Casa Blanca’, in part, became so significant due to his partnership with Luka Modric and Toni Kroos. The trio, who dominated Europe, have gone down in the sport’s history books.

It’s interesting to see, therefore, that his new number is the same as the Croatian and the German’s added up.

In addition, the 30-year-old won 18 titles with the Spanish giants. United fans will be hoping he can add to that tally over his spell at Old Trafford.