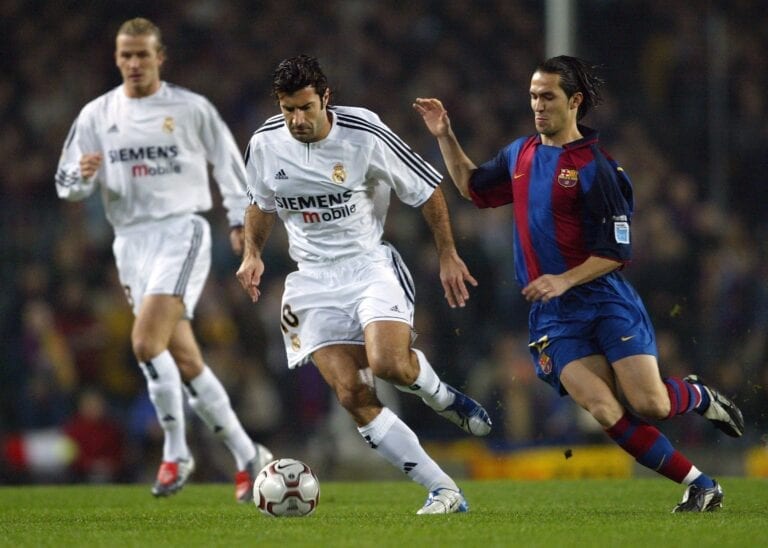 Real Madrid will host Barcelona in the second El Clasico of the 2020/21 LaLiga season on Saturday.

There are plenty of potential subplots involved, given that just two points separates the sides in the table.

Should either side be victorious, they could top the division ahead of current league leaders Atletico Madrid at the end of the day.

It is likely to be a game filled with drama, as is normally the case between the two biggest clubs in Spain.

Whilst the rivalry is always at fever-pitch on the field of play, it has also been evident in the transfer market over the years.

Many players wouldn’t give switching Barca for Real or vice versa, or even simply representing both clubs throughout their careers, a second thought. But a number have chosen to go down either route.

Here’s a look at five players who have crossed the El Clasico divide:

Luis Figo, the soon-to-be Ballon D’Or winner, sent shockwaves across the footballing world when swapped the Nou Camp for the Bernabeu in 2000.

He became the world’s most expensive player in the process, signing for a fee of around €62 million.

The Portuguese midfielder’s career would hit even greater heights at Real. He won the 2001 FIFA World Player of the Year award, and the Champions League a year later.

Signed by Sir Bobby Robson’s Barcelona in 1996, Ronaldo was simply unstoppable for Blaugrana.

He only stayed at Barca for one season but his impact on the club in that time was huge. The Brazilian scored a sensational 47 goals in all competitions as the club secured a treble of trophies.

After a spell at Inter Milan, Ronaldo returned to LaLiga in 2002, but this time with Real.

The two-time World Cup winner shone at Real despite a series of injuries, scoring 83 goals in a five-year spell. He won the Ballon D’Or in 2002.

Part of the Barca side that won four league titles in a row between 1991 and 1994, Michael Laudrup made a shock move to Real in the latter year, following the World Cup.

He helped Real to the LaLiga title in his first season, before playing a part in a 5-0 El Clasico thrashing of his former club a year later.

The Danish international left Real in 1996, having become the only player to win LaLiga five times in a row whilst playing for two different clubs.

Luis Enrique established himself as one of the best midfielders in Spain after joining Real from his first professional club Sporting Gijon in 1991.

Under the management of Jorge Valdano, Enrique and Real won LaLiga in 1995.

The current Spain manager then left Real in 1996 – the same year as Laudrup – to join Barca.

He became a club legend with Blaugrana, winning LaLiga on two occasions as well as serving as club captain. Enrique also helped the side to UEFA Cup Winners’ Cup and Super Cup success in 1997.

After retirement, he later served as Barca manager, winning the treble in his first season.

Bernd Schuster joined Barcelona at the age of 20 from German side FC Koln in 1980, and became an important part of their midfield for much of the decade.

Barca won LaLiga and the European Cup Winners’ Cup during Schuster’s time there, as well as three Copa del Reys.

He was a goalscoring midfielder, recording 63 goals in 170 appearances for the club.

The German made a controversial move to Real Madrid in 1988 and won consecutive LaLiga titles before leaving in 2000. He managed the club between 2007 and 2008 and secured the LaLiga title in his first season.

Watch ElClásico between Real Madrid and Barcelona this Saturday 10 April at 8pm on LaLigaTV, available from just £6.99 a month via Premier Sports and Amazon Prime Video Channels.