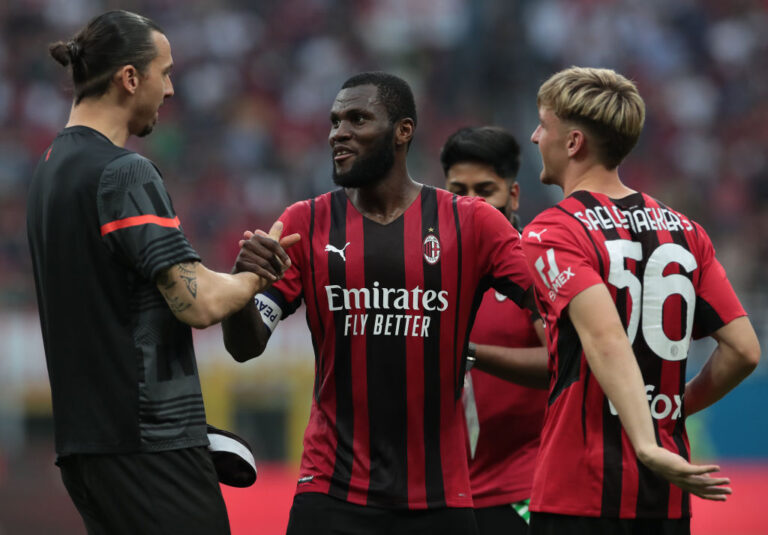 Following his summer move to Barcelona, Ivorian midfielder Franck Kessie has revealed that Zlatan Ibrahimovic gave him a key piece of advice before he moved to the Camp Nou.

The duo played together at AC Milan last season, winning the Italian club’s first Serie A title since 2011.

Barcelona unveiled Kessie at the club’s training ground on Wednesday, with the midfielder signing a four-year contract with the Catalans.

The Ivorian international joined the Spanish giants on a free transfer after his contract with AC Milan expired in June.

Financially-stricken Barcelona were only able to make the signing due to it being a free transfer, and also announced the acquisition of former Chelsea defender Andreas Christensen on a Bosman too.

Kessie posed for photographs, but his squad number for the 2022/23 season is yet to be revealed.

The Swede has also played for Barcelona, but his time at the Camp Nou was turbulent.

Things quickly turned sour despite his career at the Catalan club starting well. Ibrahimovic fell out with Pep Guardiola due to the Spanish manager’s desire to play Lionel Messi through the middle of his attack.

Famously, the striker accused Guardiola of having “no balls”, amongst other insults, effectively terminating his time at the Spanish club.

The Swede spent just one year with Barcelona, before leaving for AC Milan in 2010. Ibra enjoyed success in his first spell at the Italian club, winning the Serie A title and the Supercoppa Italiana in 2011.

The iconic striker played for Paris Saint-Germain, Man United and LA Galaxy, before returning to AC Milan in 2019.

Last season, Zlatan Ibrahimovic and Franck Kessie helped the Rossoneri achieve their first Serie A title since 2011 – the year Ibrahimovic left the club.

What Zlatan Ibrahimovic said to Franck Kessie about Barcelona

Speaking at his unveiling, Kessie revealed his former team-mate’s advice ahead of his move to the Catalans.

He said: “I spoke to Ibrahimovic, and he gave me some advice. He told me to work hard, give my absolute best and go as far as possible at this club.”

Despite Ibrahimovic’s Barcelona stint ending on a sour note, it seems as though the Swedish icon still wants to see his old club, and former team-mate, do well.