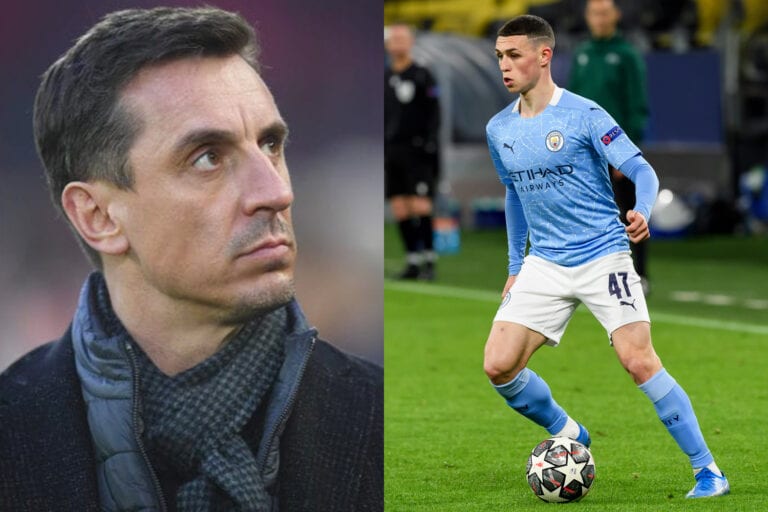 Gary Neville has again advised that footballers should run their own social media accounts after Manchester City midfielder Phil Foden deleted a tweet reportedly posted to his account by his social media team.

City progressed to the semi-finals of the Champions League for the second time in their history on Wednesday night, defeating Dortmund 4-2 on aggregate.

They play Paris Saint-Germain in the semi-finals.

Foden was instrumental in their success, scoring in both legs of the tie.

His goal in the second leg at Signal Iduna Park essentially sealed the tie in City’s favour. The 20-year-old put Pep Guardiola‘s side 2-1 up on the night, which was the full-time result.

But it later emerged that Foden hadn’t posted the tweet himself.

It was instead allegedly sent out by those that control his social media accounts, and was posted without the City midfielder’s permission. The post was quickly deleted.

After seeing the news, Sky Sports pundit Neville reiterated his belief that the players themselves should have full control over their accounts.

He first raised the issue after England’s victory over Poland in a World Cup qualifier last month.

Some of the England players posted remarkably similar post-match tweets after the game.

Neville questioned whether the tweets were authentic, and said it was a shame the players “don’t manage their personal connection to the fans and media”.

After Spurs’ 3-0 Europa League defeat – and elimination – against Dinamo Zagreb, Hart’s account posted a photo of the result with the caption ‘Job done’.

The goalkeeper revealed the following day that the post had been sent out by his own social media team. He apologised to Spurs supporters.