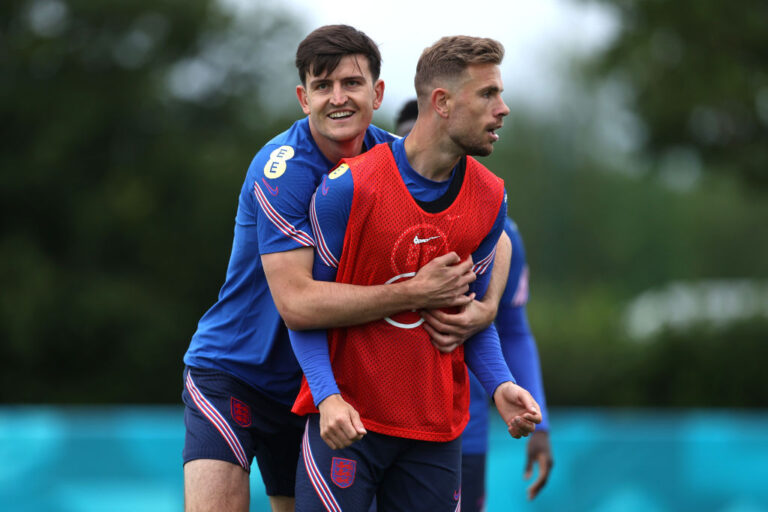 ‘The Red Devils’ captain, who is perhaps suffering from a prolonged hangover from the disappointment of losing the Euro 2020 final, has struggled to put together any sort of form this campaign. His defending has looked sloppy, he’s lacked recovery pace, and his motivation looks disappointing, to say the least.

But sometimes, to break a negative spell, you need time away to reevaluate before returning to the problem with a reinvigorated mindset. Despite not making it off the bench during the Switzerland game, this is what a break from Old Trafford should’ve given him. But it appears that he can’t escape from the negativity as his teammates are calling out his bizarre play.

Jordan Hendeson baffled by Harry Maguire during a team drill

Inside Training posted a video of England’s preparation for their match on March 26. The clip featured the squad participating in a rondo exercise. The aim is for several players to pass the ball around a circle while two defenders try and make interceptions. In this instance, Jack Grealish and Nick Pope played the role of the opposition.

The point of the exercise revolves around making quick decisions by offloading the ball to the correct player to keep it away from the defenders. With the standard being so high, the exercise was beautiful to watch as the elite players evaded the interceptors with ease. Henderson even began counting as the group took one touch a piece to move on the play.

The Liverpool captain got as high as 43. But then Maguire decided to take an additional touch and wait for Pope to approach. This clearly baffled the Liverpool midfielder.

He questioned: “What are you doing?”

Maguire’s peculiar decision confused the entire squad, but sadly the camera cut away before he could explain his actions. This sadly means we’ll never know why the powerhouse concluded that this was the right call to make.