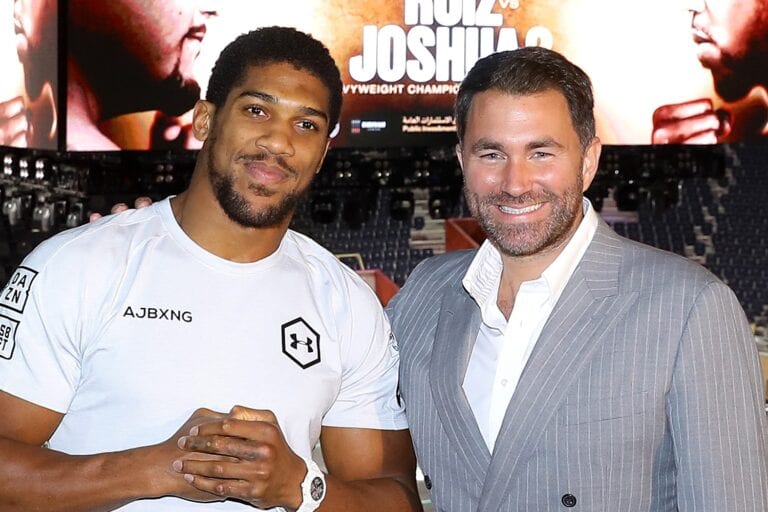 Eddie Hearn has hinted that Anthony Joshua vs Tyson Fury could take place at Wembley Stadium.

We’ve all been waiting for years now to see the AJ vs Fury superfight and all signs seems to be pointing towards it finally happening.

Of course, signing on the dotted line in boxing always proves to be a bit more complicated than that, but with the fights apparently agreed, hopefully it won’t be too long before we get full confirmation.

It’s no secret that Wembley would be the preferred venue of the majority of British fans. However, with no clear indication on what the situation will be in terms of fans being allowed in, the London venue feels extremely unlikely to host.

However in a somewhat surprising revelation, Hearn hinted that the stadium is not yet completely off the cards, during an appearance on talkSPORT.

“All things being equal, we wouldn’t even be having conversations with anywhere else in the world to be honest with you, we’d just be straight into Wembley.” He explained.

? “I told him about the Euros and if we could get full capacity at Wembley.”

?? “If we could, that brings London and Wembley into the conversation!”@EddieHearn discusses where Joshua vs Fury could be held ? pic.twitter.com/OGpnzp7PTH

“Obviously it is the biggest fight of our generation. It’s the moment of both fighters’ careers.

“We do have to look at opportunities and with the crowd restrictions it makes it even more difficult to generate the kind of money in the UK that you need.

“There have been a couple of conversations over the last 48 hours, I spoke to Bob Arum on Monday at length. We were talking about Wembley and he asked me about the restrictions and of course I told him about the Euros going into Wembley and talks of full capacity going in there in June/July.

“Could we get full capacity after the Euros, sort of middle/end of July? If we could, that does bring London and Wembley into the conversation.”

While it’s nice to hear Hearn is remaining hopeful that the fight could take place on these shores, the general feeling remains that it will most likely be Saudi Arabia hosting the first bout.

However, with the eventual rematch reportedly pencilled in for December, both parties will be hoping they can bring the show British boxing fans have been waiting for, back to the capital.