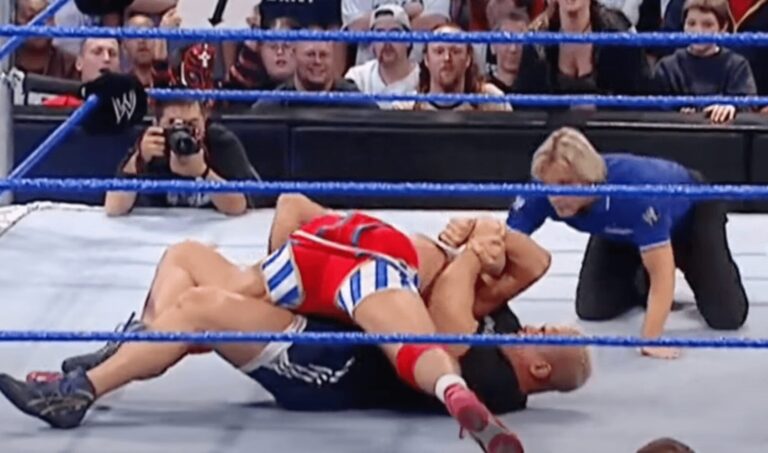 In a business as cutthroat as WWE, wrestlers have to make a splash as early as their debut, but Daniel Puder took it a step too far against Kurt Angle.

Superstars like John Cena took full advantage of their time in the spotlight. The future sixteen-time world champion accepted the Olympic gold medal winner’s open challenge and made a massive impact. He slapped him before showcasing his monstrous potential. This was, of course, a work (scripted), not a shoot.

Although he didn’t win the contest, his performances catapulted him into the global phenomenon fans know and love today. But not every star had the good fortune of gelling with Angle.

During a 2004 edition of Smackdown, Puder went way off-script. To be fair, he was only following Angle’s lead. The established WWE star was hazing the Tough Enough contestants at his mercy and got carried away by issuing an open challenge, which the eager Puder accepted.

He decided to put Angle in a dangerous submission hold, which nearly broke his arm. In the aftermath of the unscripted incident, the wrestling icon gave the youngster a piece of his mind. The WWE Hall of Famer addressed the incident in 2021.

During a video interview for the YouTube channel The Hannibal TV, the WWE legend explained what happened that day.

He said: “It was a wrestling match, and he caught me in a submission, and it really wasn’t supposed to be a submission. I told him that afterwards. I said, ‘You’re a dumbass because you pinned yourself. But I like Dan. I actually got along with him really well. We were supposed to have a programme right before Wrestlemania. But there were rumours of his attitude, and he was pi**ing off some of the boys.”

“He just came across as arrogant, and a lot of guys took their frustrations with him out at the Rumble.

“If you watch the match, they were chopping the crap out of him., chest chopping, just brutalising him. The poor kid didn’t even know how to wrestle yet. He was put in a situation where he was uncomfortable, and I totally get why he was upset.”

The great then elaborated on why Puder left the promotion: “The company felt he wasn’t picking up on the technique as quick as they wanted him to. So they decided to let him go. I think he lasted for a good six-eight months. But his contract was coming up again, and they didn’t want to renew the contract for a £250,000 guarantee. They wanted to drop him to $75,000, and he said ‘no’.

“So I think they wanted to continue to train him for another year, and I think Daniel decided not to because the money dropped dramatically.”

After moving on from WWE, Puder wrestled in promotions like Ring of Honour and New Japan Pro Wrestling before retiring from the sport. Since hanging up the boots, the American has carved out a successful business career. He founded ‘My Life, My Power‘, which helps police departments, schools and parents combat bullying.