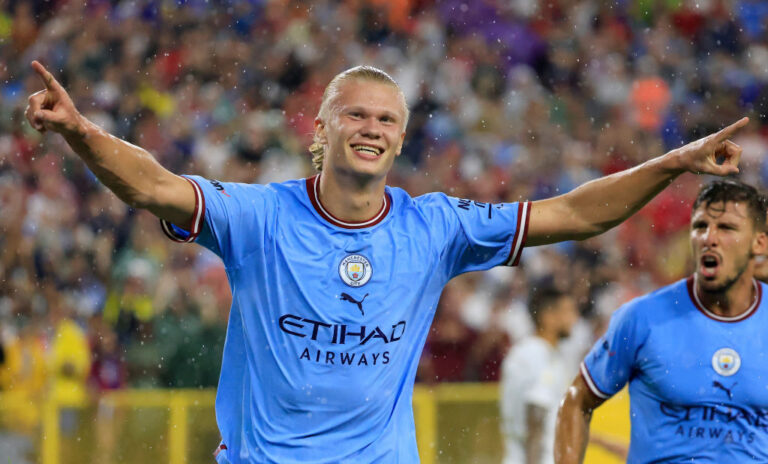 Erling Haaland is one of football’s biggest goal machines – but how many goals has he scored in his career?

The Norwegian starlet signed for Manchester City this summer from Borussia Dortmund. He joins the Citizens for a fee of £51 million. However, this figure is expected to be higher when other fees are considered.

Haaland will look to hit the ground running with his new team this season. He was given the number nine shirt, and will spearhead City’s quest to retain their Premier League title for a second successive season.

He will have to work hard to match his goalscoring form from Dortmund, however. In two-and-a-half seasons with the German club, Haaland smashed in 62 Bundesliga goals from 67 games.

During his time in Germany, the 22-year-old also became the quickest striker to hit 20 Champions League goals.

The pedigree, therefore, is there – now he has to continue to enhance it in England.

But how many goals has Haaland scored in his career? Let’s take a look:

Erling Haaland began his professional career with local Norwegian side Bryne in 2016. Initially operating as a winger, before moving up front, the youngster did not score a goal in his opening season of professional football.

However, that would soon change. In February 2017, at the age of 16, he joined Norwegian giants Molde. In the 2017 Eliteserien season, he scored two league goals. He also netted twice in cup competitions, taking his overall season tally to four goals.

The following season, in 2018, Haaland was more prolific. A further 12 goals were scored in the league competition. He also played in Europe for the first time. Haaland smashed in four goals from just five games in the Europa League. He netted 16 goals from 30 games in all competitions.

Haaland officially joined Red Bull Salzburg in January 2019. It took him time to find his feet in his first season, netting one goal in five games. The following season, however, Haaland lit up the Austrian Bundesliga.

An incredible 16 goals in 14 league games in 2019/20 meant the Norwegian was in top form heading into his mid-season transfer to Borussia Dortmund. He added to that tally with four goals in two games in the national cups. But his most eye-catching performances came in the Champions League. Haaland netted eight goals in just six matches.

The striker would add a further 16 goals from 18 games in all competitions for Dortmund to take his seasonal tally up to 44 goals.

In 2020/21, Haaland took his game to new heights, smashing in 41 goals in the same amount of games. A total of 10 of those goals came in the Champions League. The 2021/22 season was leaner in comparison, with the Norwegian suffering from injury. However, he still scored 29 goals from 30 matches.

In total, Erling Haaland has scored an incredible 135 goals from 183 appearances (excluding goals scored for reserve teams) in his career so far. At the international level, meanwhile, he has scored 20 goals from 21 appearances for the Norway senior team.

At 22, he is just getting started, with many more goals undoubtedly set to arrive whilst at Manchester City.