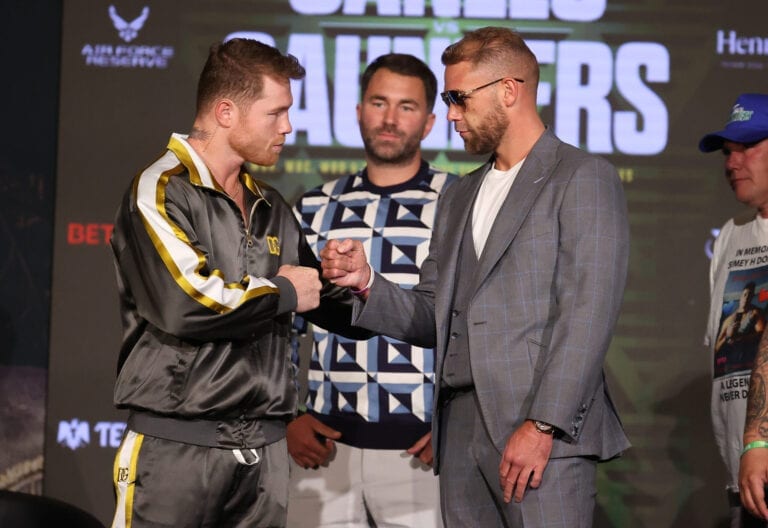 Canelo Alvarez and Billy Joe Saunders are set to face off in Texas on Saturday in a unification bout for the super-middleweight titles.

Alvarez currently holds the WBA and WBC belts, and is also rated as the best pound-for-pound boxer in the sport by a number of outlets.

Saunders is the reigning WBO champion, a title which he won by defeating German fighter Shefat Isufi back in 2019.

The Brit has since defended the belt against compatriot Martin Murray and the Argentinian boxer Marcelo Esteban Coceres.

Saunders is yet to taste defeat in his professional boxing career (30 fights), whilst Alvarez has lost once in 58 fights – to Floyd Mayweather Jr. back in 2013 via majority decisions.

Tyson Fury told Eddie Hearn‘s ‘No Passion, No Point‘ podcast earlier this week that he believes Saunders will elevate himself into a positions as “one of the best British middleweights in the history of boxing, if not one of the best middleweights of all-time” should he win the fight against Alvarez.

It is set to be a highly-anticipated bout to crown the division’s undisputed champion. But how much will each man earn from the fight?

Both men are set to earn large guaranteed payouts from the fight. However, according to Sportekz, they will receive differing amounts.

Per the same source, Alvarez will receive $15 million as a guaranteed payout, based on his contract with DAZN, as well as 60% of the pay-per-view share.

Saunders, meanwhile, will earn $2.5 million guaranteed, and 40% of the pay-per-view share.

The fight will be shown live on DAZN in the UK.