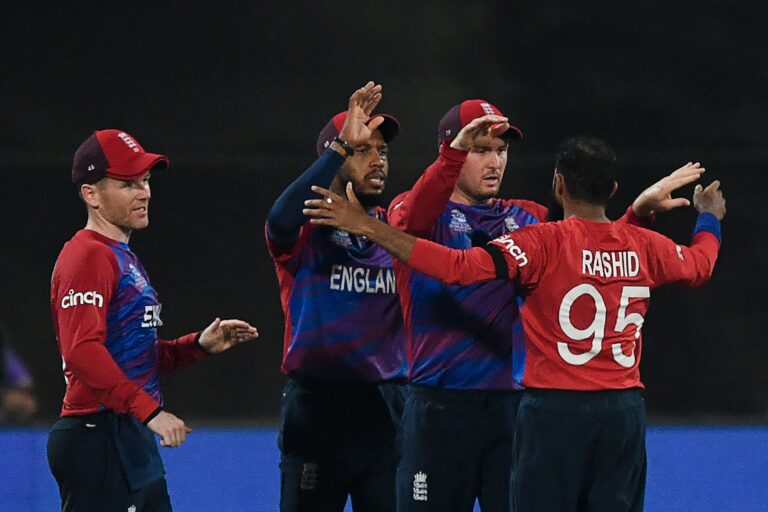 England went into the T20 World Cup as favourites to take home the trophy – and they have certainly been one of the most eye-catching teams during the tournament thus far.

After four wins in their first four games, Eoin Morgan‘s side had all but qualified for the semi-finals before taking on South Africa in their final Super 12s fixture last Saturday. They lost by ten runs, but that didn’t stop them from topping Group 1.

On Wednesday, they take on New Zealand in the semi-finals. Let’s take a look at some of the main factors involved in each win for Morgan’s side and how England got to the semi-finals:

Joining England as one of the pre-tournament favourites were the West Indies. Now captained by hard-hitting all-rounder Kieron Pollard, they were the most recent winners of the T20 World Cup in 2016.

In Dubai, however, they were simply no match for England. Moeen Ali took two wickets in the powerplay as West Indies were restricted to 31 for four from six overs before Adil Rashid took incredible figures of 4/2 to ensure the opposition was bowled out for just 55.

England reached their target with six wickets and 11.4 overs to spare. It was an incredible start to the tournament.

On a pitch that was less conducive to spin than in Dubai, England’s bowlers stood up to the task against Bangladesh in Abu Dhabi.

After losing their first three wickets for just 26 runs, Bangladesh somewhat recovered to 60 for three ahead of the final ten overs of their innings.

But England struck at regular intervals in the middle overs, and the opposition was reduced to 102 for seven with three overs remaining.

They managed to scramble to 124 for nine. Jason Roy’s blistering 61 off 38 balls provided the platform for England to take their second consecutive victory.

Buttler to the fore as England defeat old rivals

By the time England faced Australia in their third match of the T20 World Cup, it had become clear that bowling first was generally the way to go.

Eoin Morgan won the toss against Australia and – you guessed it – elected to bowl first. What happened next was an hour of destruction.

By the time Australia had completed the opening six-over powerplay, they had just 21 runs on the board for the loss of three wickets. Then Adil Rashid struck with the first ball of the seventh over, trapping Marcus Stoinis lbw.

With five overs to go, Australia were just 67 for five. Ashton Agar and Pat Cummins shared four sixes to help push their side to 125, but England had done the damage in the early overs.

It was Jos Buttler who dealt the damaging blows in England’s innings. Adapting to the pitch like no other batter had been able to, he smashed 71 off just 32 balls to guide England to victory with over eight overs to spare.

England got a taste of batting first for the first time in the tournament against Sri Lanka on November 1. When they fell to 35 for three inside the first six overs, you could see why so many teams had struggled when having first use of the pitch.

His unbeaten 101 off 67 balls represented his first-ever T20 international hundred. He brought it up with a six off the last ball.

In response, Sri Lanka made solid work of their 164 run target. With four overs left, they needed 41 to win.

But wickets then began to fall in spades, and they couldn’t keep up with the rate. England eventually bowled Sri Lanka out for 137, all but ensuring a place in the T20 World Cup semi-finals that Morgan’s side would secure in their final match against South Africa.