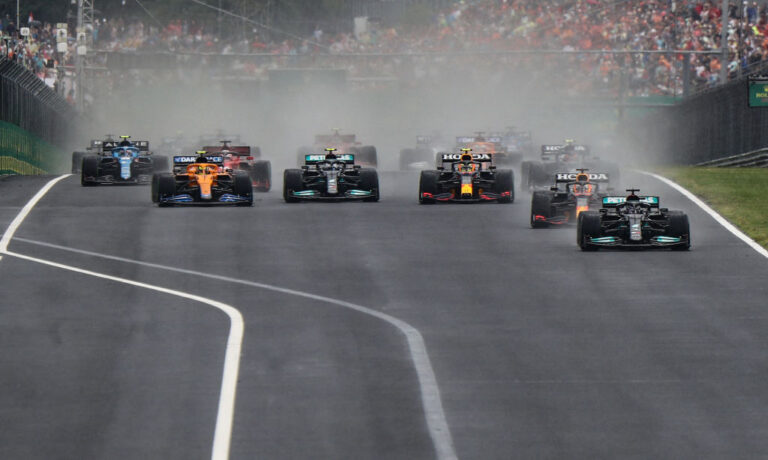 The Hungarian Grand Prix brings excitement to fans whenever rain is present – but what is the weather forecast for this weekend?

It is fair to say that a fully dry Hungarian Grand Prix isn’t usually the best spectacle on the F1 calendar in terms of pure entertainment. It is more of an attritional battle, with pit stops used to gain track position rather than masses of overtaking.

The Hungaroring, however, does offer overtaking opportunities, even though drivers are made to work hard for them.

Just outside Budapest, however, rain is often on the radar at this time of year. And it provides some action-packed racing.

Last season, for instance, there was a multi-car collision at turn one under wet conditions. After a red flag period came and went, Lewis Hamilton ended up being the only car to take the restart. That was because every other car had pitted.

Ocon and Vettel, however, were never challenged by those behind them. The Frenchman held off the four-time world champion to win his maiden Grand Prix. Vettel would have finished second if he hadn’t have been disqualified for a fuel infringement.

Much like last year, the weather forecast could play a massive role in this weekend’s Hungarian Grand Prix. Teams already had one eye on the radar during practice on Friday. But how much rain is expected this weekend? Let’s take a look:

Put simply, Saturday is set to be a washout in terms of rain.

The Met Office is predicting light and heavy rain for much of the day, with the chance of precipitation standing between 50% and 60% for most of that time.

Between 4pm and 5pm local time – when qualifying is scheduled to take place – there is a 60% chance of rain, with temperatures standing at 24 degrees Celsius. That could cause thunderstorms, which would likely halt the session.

BBC Weather is predicting thunderstorms for most of the day. With F3, F2 and W Series support races also taking place, there is a chance that the F1 session could be slightly delayed.

What happens if qualifying is delayed?

If qualifying does not occur on Saturday, F1 protocol generally states that the session will be held on Sunday, before the race.

If this does happen, F1 chiefs will have plenty of headaches. That is because, as mentioned above, there is a full calendar of support races this weekend, meaning the qualifying action will have to be squeezed in somewhere.

For the race, the likelihood of rain is currently low. However, the Met Office suggests there is still a 10% chance of rain between 1pm and 3pm local time.

BBC Weather, meanwhile, said on Saturday there is a 31% chance of rain between 9am and 11am, but this percentage comfortably drops before the Hungarian Grand Prix gets underway at 3pm.

That prediction has since been updated, with rain on the forecast at 2pm local time. There is now a 26% chance of rain when the race gets underway at 3pm.

But as F1 fans know very well, the weather can change quickly. And with temperatures ranging between 20 and 23 degrees Celsius until the start, early-morning rain might cause drivers a few problems in the early laps.