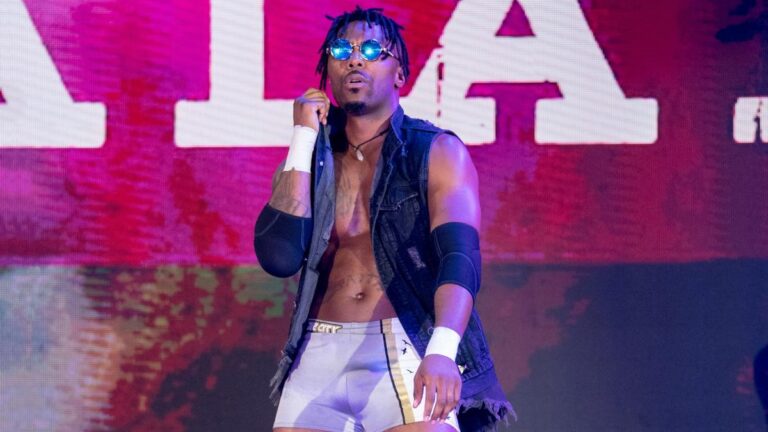 Isaiah ‘Swerve’ Scott has opened up about the origins of Hit Row and revealed who came up with the original idea for the faction!

Speaking exclusively to Kenny McIntosh of Sporf and Inside The Ropes, Swerve revealed how his Hit Row faction came to be and recalled how Ashante, Top Dolla and B-Fab were originally part of their own group which didn’t end up working out.

“It was honestly as simple as peanut butter and jelly and boom there’s the sandwich. It was literally as simple as that. They were doing a group in the Performance Centre called The Hitmakers, it was Ashante [Adonis], Top Dolla and B-Fab, they were their own separate group. They were supposed to take off and do something in another project that didn’t end up happening in the Performance Centre and I just came off of the Falls Count Anywhere match with Leon Ruff.”

The reigning NXT North American champion went on to reveal how Triple H had the idea of putting him with the trio in an attempt to “put more fire” underneath the current reinvention of his character.

So I was like in a groove and Triple H felt that I was in a really good groove right now with my character shift. My hair colour, my grills and my mouth and all these I was doing – such a drastic change and he loved it. He wanted to support it and put more fire underneath it and support what I was doing. So he just said ‘Hey, we have AJ Francis, Ashante and B-Fab over here doing some stuff so I want to put them with you.’ I’m like ‘Okay’ and there we go. So it was literally as simple as that.

So we just started hanging out a lot more, watching Raw and SmackDown together and having these interactions. The way we were talking and laughing and clowning at each other, among other things, we were like ‘We need to do the same thing, keep the same energy and put it on TV.’ So they’re like ‘Oh, cool. Yeah, let’s do this.'”

Scott also discussed the origins of the group’s name, it being a mash-up of the names of a faction Top Dolla led prior to joining WWE and The Hitmakers!

“Top Dolla had a group on the independents called The Row and that was a great concept. He was leading this group, It was a lot of rappers and friends of his that rapped on the side. They weren’t real wrestlers. They were just supporting his matches and stuff like that and came out with him and I always thought that was dope. Then they were The Hitmakers, so we took those two concepts and just put it together and made Hit Row.”

Since forming Hit Row earlier this year the former Shane Strickland has gone from strength to strength, most notably capturing the North American Championship from Bronson Reed in late June. He and Hit Row have since entered a rivalry with Santos Escobar’s Legado Del Fantasma with the former Cruiserweight Champion hinting that he wants a shot at Swerve’s gold.