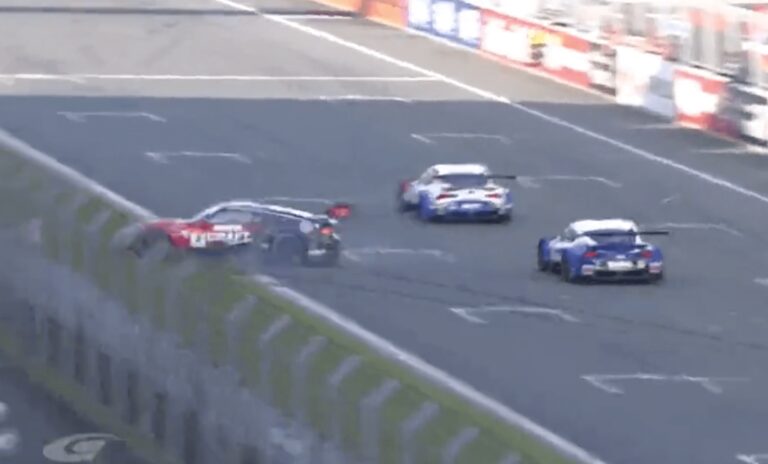 A Japanese Super GT race at the Fuji Speedway had to be stopped earlier today after driver Mitsunori Takaboshi was involved in a shocking crash.

The FAV Hotel Fuji GT 450km Race took place at the Fuji Speedway between May 3-4. It is the second round of the 2022 Super GT calendar.

Super GT is the highest level of sports car racing in Japan, and drivers can reach speeds of more than 180 miles per hour.

Takaboshi had started the race well and was chasing down Yuhi Sekiguchi for the lead. But the race was halted on the 59th lap after the NDDP Racing driver crashed into the barrier.

Takaboshi hurtled down the straight, closely behind race leader Sekiguchi, and only saw the slow-moving Takeshi Suehiro when Sekiguchi swerved to avoid him. Then, the Arnage Racing driver’s sluggish speed forced Sekiguchi and Takaboshi to take evasive measures to avoid him.

As a result, Takaboshi lost control of his Nissan Z and slammed into the barriers. The Japanese driver’s car flew into a frenzy of spins, and debris from his car shot across the track in multiple directions.

Thankfully, drivers who were following Takaboshi were able to navigate around him. The race was stopped immediately as emergency services rushed to help the 29-year-old.

Super GT race organisers reported that the driver was able to climb out of his car and was taken to an ambulance. However, while Takaboshi did not have any serious injuries, he went to hospital as a precautionary measure.

Not long after the crash, Nissan teammate Chiyo Katsumasa posted an image on Twitter of himself and Takaboshi, who was smiling at the camera with a cheerful hand gesture.

Katsumasa accompanied this photo with the words: “I met Mitsu.”

Furthermore, he continued to quote his teammate underneath: “I am conscious and safe. It was a very dangerous situation, so I’m really glad.”