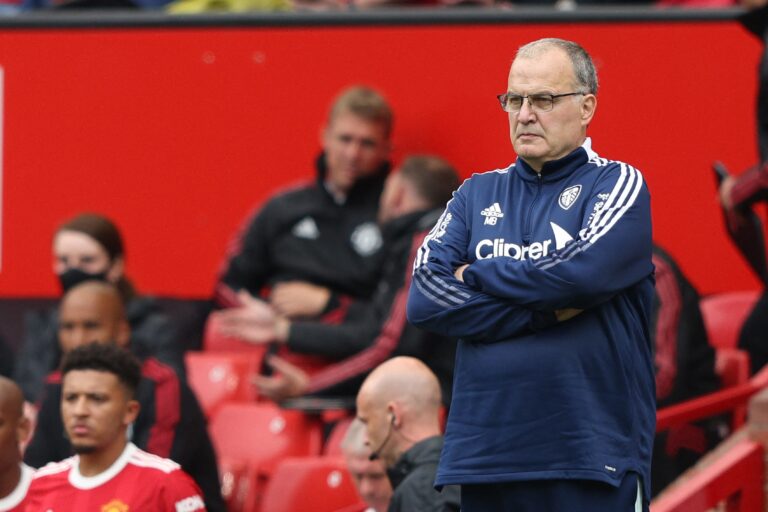 Leeds fans have provided a huge reminder of the worth of their manager Marcelo Bielsa after he received criticism following their side’s 5-1 defeat to Manchester United on Saturday.

In just their second visit to Old Trafford in 17 years, Leeds were heavily beaten by a hat-trick from Bruno Fernandes and goals from Mason Greenwood and Fred.

In typical Leeds style, they created plenty of chances. Luke Ayling scored a stunner to level the scores at 1-1 in the second half.

But Bielsa’s side were blown away when they conceded four goals inside 16 minutes.

After the match, the Leeds boss was criticised by former Nottingham Forest and Liverpool striker Stan Collymore.

In his Mirror Sport column, Collymore wrote: “Another season and already another set of excuses for Leeds under their untouchable manager, Marcelo Bielsa.

“Yes, we know he got them promoted with players who weren’t anywhere near favourites to go up. Yes, we know several managers were inspired by his approach to fitness and being on the front foot as much as possible. And yes, he’s eccentric.

“But he’s also on £8 million a year and, for that, Leeds should be getting a manager whose side can attack and create but be pragmatic and defend when they need to as well.

“Certainly, they should be getting someone who can offer more after a 5-1 defeat than, ‘We were better than the corresponding fixture last year’.

“Because no, mate, you weren’t and, having lost this game 6-2, this result means you conceded 11 goals in those two games against your biggest rivals.”

Leeds fans quickly hit back at the criticism of their manager. They provided a graph on social media that illustrates Bielsa’s worth to the club.

The 66-year-old has accrued the best points to cost of squad ratio of any manager in the Premier League.

He also guided the club to ninth place on their return to the Premier League last season.

They recorded victories over the likes of Tottenham, Leicester and Everton, as well as a superb 2-1 away win over eventual champions Manchester City.

Leeds are next in Premier League action on Saturday, when they take on Everton at Elland Road.