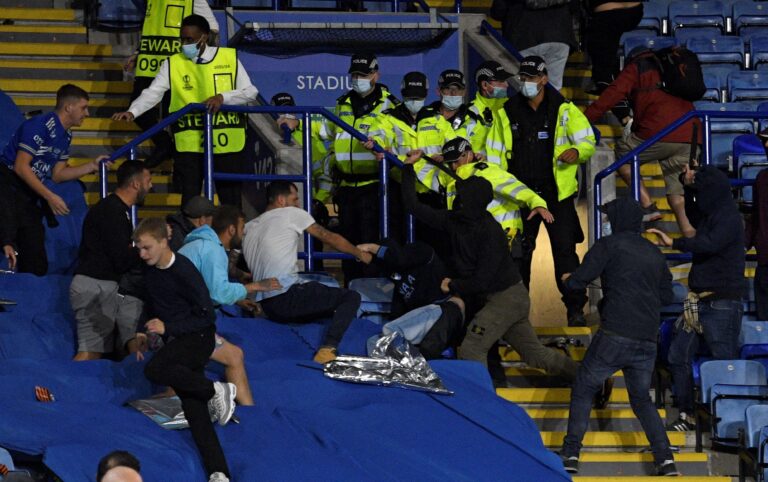 Shocking footage has emerged of Leicester and Napoli fans clashing after the two sides drew 2-2 in the Europa League on Thursday.

The Foxes led 2-0 through goals from Ayoze Perez and Harvey Barnes, before Victor Osimhen scored a brace for Napoli to level the score.

After the match, things got heated between both sets of fans inside the King Power Stadium.

The footage shows a group of Napoli fans approach the area where the Leicester support is based before both sets of supporters appear to throw missiles at one another.

The scenes quickly develop into further chaos, with more spectators rushing over to get involved.

A few moments later, security gets involved to prevent more violence, before a small group of Napoli fans try to break the barricade again, but are upended.

More objects then appear to be thrown from both sides. The incident was then calmed.

According to a tweet from The Times journalist Henry Winter, Leicester’s PA system told fans to “respect your club” and “move away from the segregation line”.

Speaking after the game, Leicester manager Brendan Rodgers praised the Napoli players on the pitch – and said the game was “a good measure” for the Foxes.

He explained: “It was a really good measure for us. Napoli are arguably the favourites for the competition but we were very competitive.

“We are disappointed to lose the goals but there is still a lot for us to be happy about and lots for us to analyse where we can do better.

“It was a really exciting game for the neutral, I was really pleased with the team in terms of the mentality, the goals and the resilience for a lot of the game.”