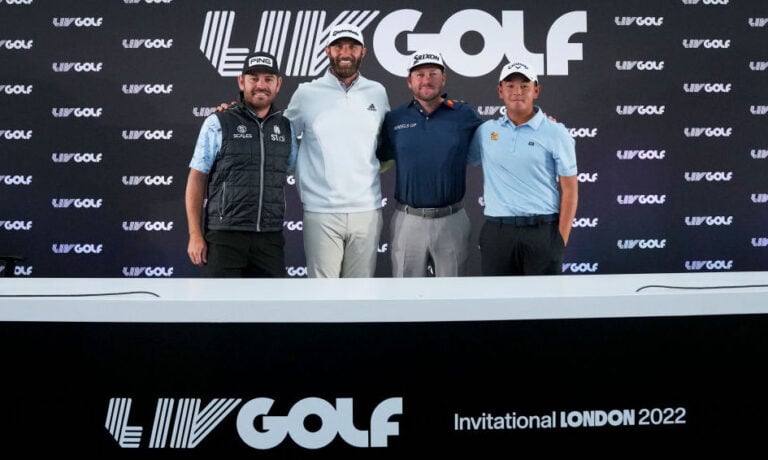 How much prize money is on offer at the LIV Golf Invitational Series? Here’s a breakdown of all the key facts and the main headlines from the breakaway tour.

The LIV Golf Invitational Series is a breakaway golf tour that is different from the traditional PGA Tour. The Saudi-backed competition gets begins on Thursday, June 9, in London.

There will be a total of eight events across the tour’s inaugural season.

Many big names have signed up to take part. Dustin Johnson, Phil Mickelson and Sergio Garcia are among the golfing icons joining up with the tour.

The impact on the PGA Tour?

The PGA Tour is threatened by the LIV Invitational. In May, they stated that any golfers that sign up for the tour would face instant suspensions and even lifetime bans.

In the golfing world, the LIV Invitational represents something very similar to the European Super League proposal in football. Many believe that the tour has come from the innate desire of the decision-makers to make as much money as possible.

European Tour Chief Executive Keith Pelley told Reuters that his organisation shared the PGA Tour’s stance in “opposing, in the strongest possible terms”, any proposal for an alternative golf league. This was done so in the interests of fans and players.

How much prize money do players get in the LIV Golf Invitational?

Given that it’s a breakaway tour and that it’s Saudi-backed, the LIV Invitational is expected to pay out whopping purses to those who participate.

According to ESPN, the total prize pot for the inaugural season is a massive $255 million. Each tournament has a prize pot of $25 million. For comparison, The Masters and PGA Championship only have pools of $15 million each in 2022.

In addition, every participant receives some of the total prize money. The last-placed golfer (48th) will rake in a huge $120,000 just for playing each tournament.

Those who finish in the top five of each event will receive massive pay-outs. Fifth place will earn just under $1 million ($975,000), while the tournament winner will receive an eye-watering $4,000,000.

The winnings for the top five are as follows: