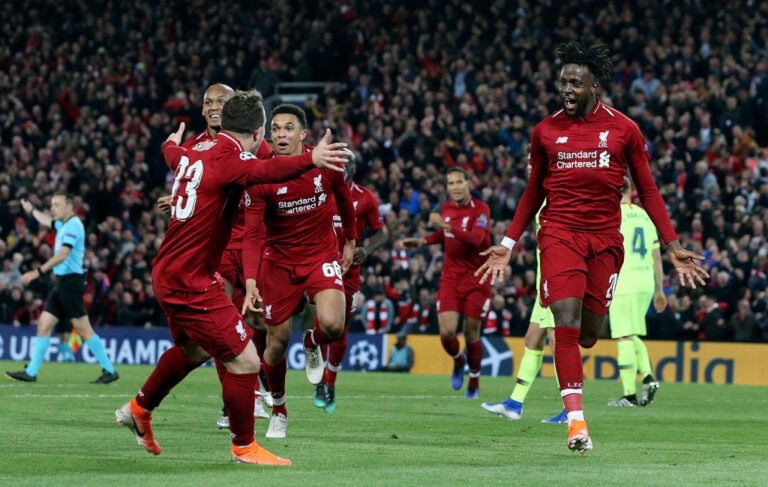 Former Liverpool striker Divock Origi has been awarded the accolade for the club’s greatest ever goal following a fan vote.

The Belgian striker’s iconic goal against Barcelona in the 2019 Champions League semi-final emerged as the most voted effort on Liverpool’s poll of ten goals from their history.

Origi’s goal is memorable for the commentary, the finish, and most importantly, because it made it 4-0 on the night and fired Jurgen Klopp’s side into the final.

It is a great time to be a Liverpool fan. While Klopp’s side narrowly missed out on Premier League and Champions League glory last season, the Reds won the FA Cup and the Carabao Cup.

In previous seasons, they have also won the Premier League and the Champions League.

Since Klopp arrived at the club in 2015, Liverpool have transformed into a footballing powerhouse on the global stage. Every season, they are among the favourites for the major honours.

As part of Liverpool’s 130th-anniversary celebrations, they asked their supporters to cast their votes on which goal they think is the best in the club’s history.

The club ranked goals 130-11 based on quality, importance, iconic status and lasting legacy, while the top 10 were featured on Liverpool’s website.

Of course, recency bias was a factor in the outcome of the vote. Only three years have passed since Origi’s iconic goal, whereas it has been a lot longer since we last saw some of the goals on Liverpool’s list.

In tenth place was the late, great Ian St John. St John’s header against Leeds in the 1965 FA Cup final clinched the trophy for the Reds.

Next up on the results is Alan Kennedy’s left-footed strike against Real Madrid, which won the 1981 European Cup final for Liverpool.

In the eighth position on the list is iconic Liverpool striker Ian Rush. The Welsh icon’s second goal in the 1986 FA Cup final sealed Liverpool’s win over Merseyside rivals Everton.

Seventh is a remarkable goal from footballing legend Kenny Dalglish against Chelsea in 1986. The player-manager scored a brilliant goal against the Blues to edge Liverpool closer to a 16th championship.

David Fairclough’s composed finish against Saint-Etienne in the 1977 European Cup is next up on the list. The goal made it 3-1 on aggregate and sent Liverpool into the semi-finals. That year, the Reds went on to win the trophy.

Another Dalglish goal features at number five, with the Scot’s delightful chip proving to be the winner against Club Brugge in the 1978 European Cup final.

Terry McDermott’s powerful header in the Reds’ 7-0 win over Tottenham in 1978 is in the fourth position. The forward attacked Steve Heighway’s cross with purpose and put the icing on an already brilliant result.

In third place is Steven Gerrard’s brilliant header against AC Milan in the 2005 Champions League final. This goal inspired the Reds’ remarkable comeback from 3-0 down to win the trophy on penalties.

Another iconic Gerrard goal was voted the second-best in Liverpool’s history. His screamer in added time of the 2006 FA Cup final drew the Reds level with West Ham before they went on to also win the cup on penalties.