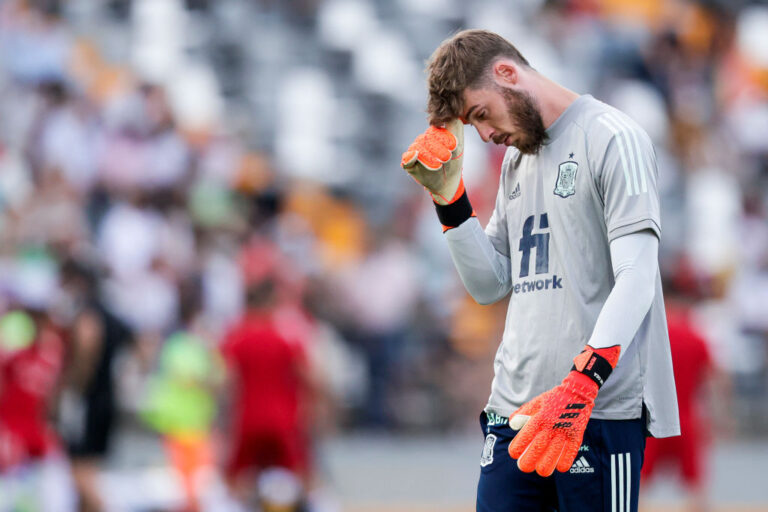 Spain manager Luis Enrique was brutally honest when asked why he did not select David de Gea in his most recent squad.

This season, the Manchester United goalkeeper was one of very few standout players at Old Trafford. De Gea’s teammates certainly recognised his value to the team, voting him the players’ Player of the Season.

In 2021/22, the Red Devils’ shot-stopper made an impressive 128 saves, including two penalty saves. However, this did not save United from their defensive frailties. Man United kept just eight clean sheets and conceded 57 goals on the way to their worst Premier League points total ever.

But this cannot be pinned on De Gea, who rescued United from further embarrassment on numerous occasions. Despite this, his status as Spain’s first-choice keeper has fallen by the wayside.

David de Gea has made 45 appearances for the Spain national side since his debut in 2014. In those 45 appearances, the Man United man has kept 21 clean sheets and conceded 36 goals. He was his country’s first-choice stopper for Euro 2016 and the 2018 World Cup.

Unfortunately, De Gea then played second-fiddle to Unai Simon, and he was an unused squad member at Euro 2020.

Amazingly, it has been nearly two years since the Spaniard started for his country. De Gea’s last game was back in October 2020 – a 1-0 defeat to Ukraine.

Further disappointment followed for De Gea, as he missed out on the squad for the international break in March.

Then, Luis Enrique left Man United’s No.1 out of his team for the Nations League fixtures that are currently taking place. Instead, the former Barcelona manager chose Bilbao’s Unai Simon, Brighton’s Robert Sanchez, and Brentford’s David Raya.

Enrique has since explained his decision in a ruthless critique.

In a press conference, Luis Enrique defended his current keeper selection – and explained why De Gea isn’t in his squad.

“I look to have three starting goalkeepers, and I think that right now I have them,” he said, quotes via Daily Mirror. “Honestly, I wouldn’t have an issue with any of the three of them starting.”

The Spain manager then explained what approach his three keepers have – whilst sending what appears to be a critique indirectly towards David de Gea.

“A goalkeeper should start the play and generate the first superiority; they must dominate the aerial play.

“I need a goalkeeper that transmits peace and calmness to me,” continued Enrique. “And that doesn’t mean they won’t make mistakes. Errors are part of football. But what they [Simon, Sanchez, and Raya] generate I like a lot.”

So, Luis Enrique’s decision to snub David de Gea appears to come down to distribution and presence in a team’s mentality.

In De Gea’s case, this is an unfortunate weak point in an otherwise incredible goalkeeper. His distribution ability lags behind some of the leading Premier League keepers, such as Alisson or Ederson. In fact, Man United’s goalkeeper ranked 18th in completed passes by goalkeepers this season, hundreds behind the top players.

This single area of the game is essential to Luis Enrique’s selection process. Therefore, De Gea is unlikely to feature in Spain’s squad for the 2022 World Cup.