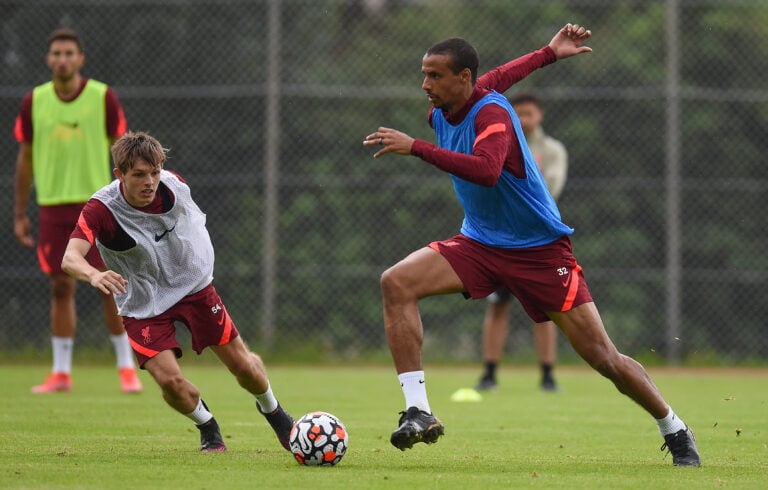 Joel Matip showed off his attacking prowess during a Liverpool training session by scoring an excellent brace – but Mohamed Salah wasn’t best pleased with Ibrahima Konate’s defending for one of the goals.

The signing was bought from RB Leipzig for a £36million fee this summer window has so far impressed Liverpool coaches during training, but Matip showed him up with a well-taken goal during a session in Austra.

The footage, released on LFCTV on Friday, shows Matip making a couple of decent goals while playing the ball out from the back and going on tremendous dribbles.

But Salah, playing on the opposing side, was unable to hide his frustration with the goals scored.

Moments such as this are nothing if not a good thing for Liverpool. It shows there is still a competitive edge among ranks and players will be willing to fight for their place in the starting line-up.

Jurgen Klopp told the club’s official site how delighted he was with Matip’s brace during the session.

“I am not sure if we have it on camera, but when Joel scored the goal [in training], Pete Krawietz was standing next to me and said, ‘Good surgery!’ He is in good shape, wow,” he said.

“Joel Matip is this kind of player, who flourishes in the moment when he enters the pitch,” Klopp continued.

“I think nobody heard him saying a lot of things when he is stood next to the pitch, but when it is a game situation – whichever game it is – he is in.

“He missed that very much because he was out for a long time, but as I said before he was the closest of all the four long-term injuries. Trent is now in normal sessions as well and we’ll see what we do with that on Tuesday.”