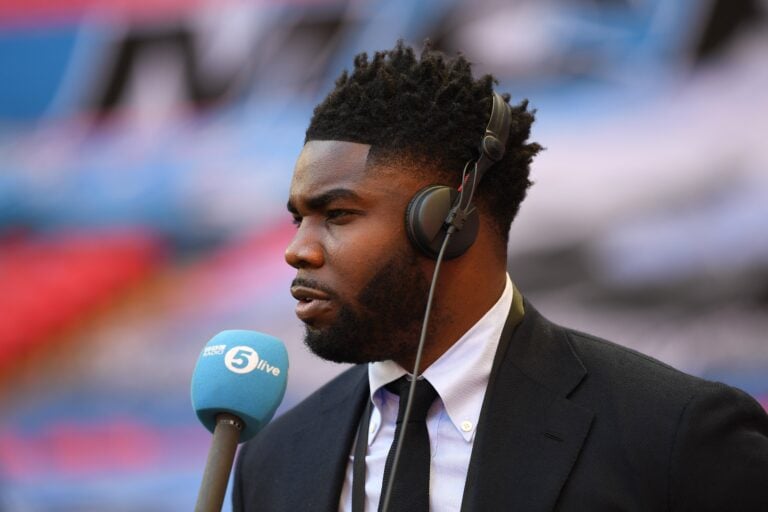 The Spurs forward told the club that he wanted to leave back in May, with City seemingly the club most likely to sign him.

However, their bid of £100 million was rejected by Spurs.

The Athletic reported Spurs’ position as that they “will not sell to another Premier League club under any circumstances”.

But reports from The Guardian last week have claimed that City will up their bid to £127m in an attempt to push Spurs chairman Daniel Levy to sell.

The 28-year-old failed to turn up to Tottenham training last week after extending his holiday – although the striker has said he “never” refused to train.

One topic of discussion amongst the pundits was the comparison between Paul Pogba – whose agent Mino Raiola has stated on multiple occasions that his client would like to leave Manchester United – and Kane’s current situation.

And Richards defended the United midfielder during the debate.

He said: “His [Pogba’s] agent might have done the talking, but he’s not done anything.

“He’s just gone out there and tried to do the best he could possibly do. Kane’s the same. That’s what players want to do.”

Souness replied: “Do you think the agent speaks without the permission of the player?

“Do you think he can just talk out nonsense?”

Souness continued: “He will be echoing the thoughts of the player.”

Neville then added his comments to the debate, stating: “If your agent comes out and says, three or four times, ‘I want to get Paul a different club’, Paul does enough interviews to say, ‘Look, my agent’s out of order, he’s got that wrong’.

“He’s never said that either, has he?”

Richards then made the direct comparison between Pogba and Kane’s futures, adding: “Kane’s not turned up for training and we’re calling him a saint.

“Pogba’s said he never wanted to leave Man United but he’s getting abuse. What’s the difference?”

Richards has since received major praise for his comments on social media from fans.

Pogba starred for United on the opening day of the season, contributing four assists in a 5-1 victory over Leeds.

He joins a select list of only eight players to have achieved the feat in the Premier League, which includes Dennis Bergkamp, Cesc Fabregas and Kane.