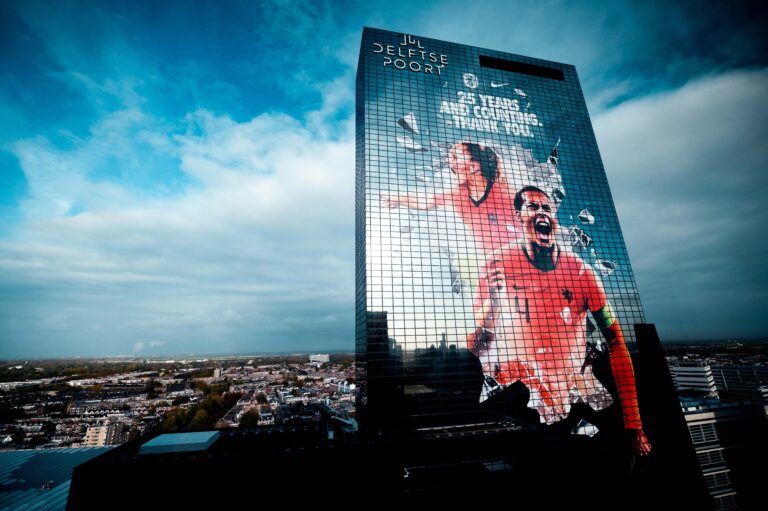 Virgil van Dijk is a totem pole for both club and country. To celebrate the Liverpool defender, the Royal Dutch Football Association have blown the titanic national captain’s image up to loom large over the streets of Rotterdam.

Van Dijk takes centre stage on a 150-metre high office building in Rotterdam. The display is part of a campaign in which the KNVB, the Royal Dutch Football Association, celebrate their 25-year long collaboration with Nike.

Dutch star of the women’s national side and European championship winner, Lieke Martens, features alongside the Liverpool legend.

The graphic, designed to show how much Nike means to Dutch football, is akin to that of the Edgar Davids wrap. In 2002, it was the biggest graphic in the entire world. At 10,000 metres long, it matched the size of the Statue of Liberty on each side.

What does Van Dijk have to say?

The Dutchman is over the moon to have received this gesture from the KNVB.

Van Dijk said: “I haven’t seen it in real life yet, but of course, I’ve seen photos and videos. It’s amazing. I’m familiar with that famous photo of Edgar Davids from years ago, and now it is myself and Lieke Martens who’ve been portraited. That is incredible. The partnership with Nike is 25 years old, which is very special for both parties.”

Read: Can anyone stop Mo Salah from winning the PFA Player of the Year 2022?

The KNVB’s long-lasting partnership with Nike will run until at least 2026. In addition to the display, they have also created a film to thank them for their support. The Dutch national team will wear celebratory jackets in their away fixture to Montenegro on Saturday.

This fixture is the first of two World Cup qualifiers this month, the second of which will be against Norway on November 16. Van Dijk’s side currently leads Group G. If that is still the case by the end of the month, they will have secured a place in Qatar.