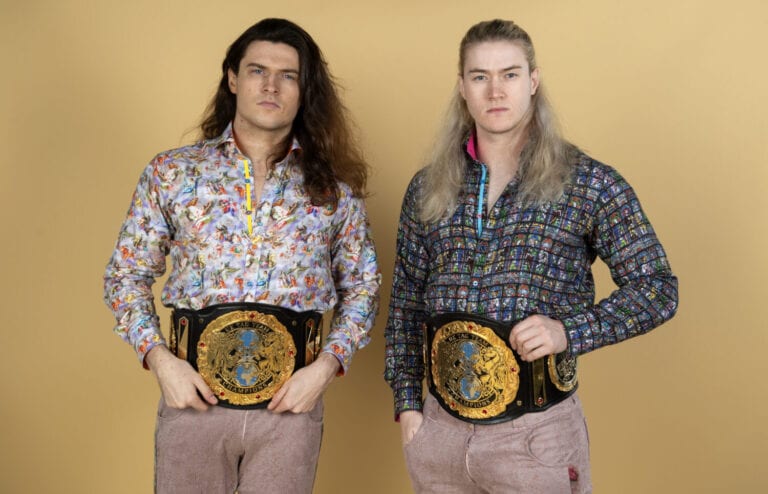 NXT UK Tag Team Champions Pretty Deadly have revealed how Shawn Michaels told them he “hated” them when he saw that their in-ring attire didn’t differ from their real-life fashion.

Kenny McIntosh of Inside The Ropes sat down with Lewis Howley and Sam Stoker to discuss how they grew up watching the likes of the Hardy Boyz and Edge & Christian, with Stoker pin-pointing the contrast of both teams, and how Pretty Deadly became somewhat of an amalgamation of both.

“I think the big two for us being at such a young age was the Hardy Boyz and Edge & Christian. I mean, there’s kind of like an unspoken or a hidden enigma and charisma to the Hardy Boyz, they don’t necessarily have to say too much and you just get such a good vibe, like the vibe I get from Lewis.

“In the ring, they were Team Xtreme, they did it all, it was the best. Edge and Christian, however, get a microphone on them, get them to pose and that, we love it, too. There are so many elements to those teams that we see in ourselves and that we can represent in this modern day of wrestling but those were big inspirations to us – before we knew we would be so successful in this company.”

Howley, meanwhile, pointed to the confidence of Jeff Hardy, and how the Charismatic Enigma’s attire was “a mess” on paper – with Stoker adding, “It’s terrible,”

“You’d be like, ‘Jeff, what a mess.’ Right? But then he comes out and he oozes that confidence. Shantay, you stay, boy! He looks incredible because he just has that confidence, and that’s something that we’ve drawn out with our outfits, people wouldn’t have the confidence to wear and they wouldn’t look very good in it because we just wear it with our chest, we look great. 10 out of 10.”

McIntosh would then ask about the influence of the original ‘Sexy Boy’ – WWE legend Shawn Michaels – and whether they may borrow inspiration, or even items, from The Heartbreak Kid!

“He’s a big fan of what we wear,” said Howley, before Stoker added how they’ve formed somewhat of a fashion faction with the Hall of Famer!

“He will call us, ‘us’ including himself, handsome guys. Good looking lads. In terms of clothing, I don’t think we will re-wear his outfits, I think we may take some inspiration. I will say this, for Pretty Deadly’s future, in TakeOvers and future pay-per-views, we’ll one-up him. We will go above and beyond.”

Howley would circle back to how Pretty Deadly were opening eyes right back at the beginning of their career, and how Michaels spotted them immediately – both due to their ability and their eccentricity when it comes to attire.

“He’s always paying us compliments. He really likes what we do. There was one time, in our early NXT UK career, we did a match and he mentioned how he enjoys our work and I think that might have been one of the occasions he referred to ‘us’ as handsome boys. After we got changed, we obviously put on some lovely club, he walks over and goes, guys, ‘Oh, do you wear that for real?! I hate you!’ And we’re like, we’ve got him.”

Following their iconic win, some brand new Pretty Deadly GIFs have launched on the official WWE GIPHY channel, and the pair would comment on their win while speaking to WWE UK with Sam Stoker saying.

“To win a prestigious title in WWE is such a big thing… it really leaves you feeling quite retrospective. To get the messages and to think back to when you’re 10 years old when you were watching Triple H at WrestleMania to now, it’s quite mind-blowing.”

Lewis Howley added: “NXT UK showcases some of the best matches and having that opportunity to show everyone what we can do, steal the show, steal the belts, we’re living life.”

Thanks to Pretty Deadly for taking the time and to WWE United Kingdom for facilitating the chat. You can follow Lewis Howley and Sam Stoker on Twitter for more.

You can watch Pretty Deadly every week on NXT UK, which is available via the WWE Network at 8pm every Thursday, then on BT Sport every Friday.