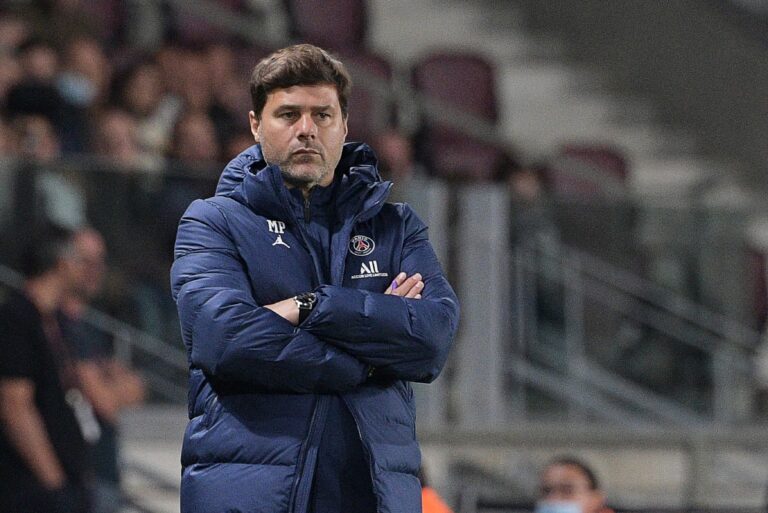 Mauricio Pochettino must win Ligue 1, progress into the latter stages of the Champions League and keep Lionel Messi, Neymar and Kylian Mbappe happy in his job as Paris Saint-Germain head coach, according to Daily Mail reporter Ian Ladyman.

It is certainly a tough task for the Argentinian, who took over at Parcs des Princes in January.

After a summer transfer window that saw PSG bring in a host of star names, including Lionel Messi and Sergio Ramos, Pochettino is now in control of perhaps the most star-studded squad in world football.

Can PSG win the Champions League?

It means that they are even further amongst the favourites to win this season’s Champions League – a trophy that has so far eluded the big-spending squad.

They reached the final of the competition in 2020 under Thomas Tuchel, but lost 1-0 to Bayern Munich.

PSG currently have a 100% record in Ligue 1 so far this season, but Ladyman says: “Pochettino knows that will never be enough, not in Paris.

“At PSG results will only shield him in part from what Kevin Keegan once described as ‘the circus parked outside’.”

Messi in particular has had a slightly shaky start to life in Paris, having failed to score or provide an assist in his opening three appearances at the club.

He was also substituted off against Lyon for what Pochettino described as a decision “to protect him for possible injuries” – but Messi did not shake the hand of his manager when leaving the field.

A knee injury ruled him out of PSG’s clashes against Metz and Montpellier in the last week, but Pochettino has confirmed that he will be available for the crunch Champions League fixture against Manchester City on Tuesday.

As for Kylian Mbappe, rumours over the last few years have continously linked him with a move to Real Madrid – and they intensified this summer.

Real were reportedly willing to pay up to €220 million to sign the forward, but PSG rejected any bids for Mbappe’s services.

The Frenchman’s contract expires at the end of the season, and it appears he is now likely to leave on a free transfer when that deal is up.

He has, however, started the season in excellent form. The 22-year-old has four goals and three assists in eight Ligue 1 appearances.

Neymar, meanwhile, has one goal and two assists in four league appearances. The Brazilian signed a new deal back in May to keep him at the Parcs des Princes until the summer of 2025.

With PSG in such a strong position – and with some of the world’s best players at the club – their fortunes this season will be focused upon heavily.