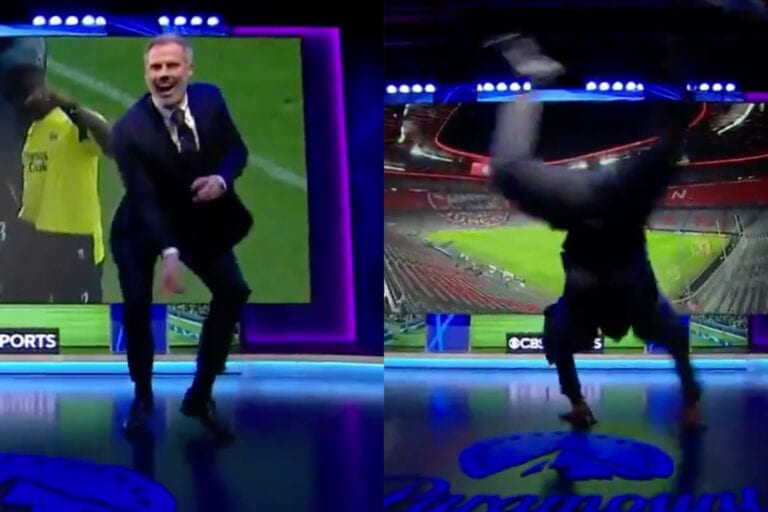 Micah Richards and Jamie Carragher have presented us with plenty of punditry highlights this season.

Watching Carragher and Gary Neville hotly debate footballing specifics on Sky Sports has become one of the highlights of the pre and post-match coverage.

After last night’s games had been concluded, the pair ended up recreating a dance that Richards had performed on the pitch with former City team-mate Ishmael Miller during a game against Everton in 2006.

During his efforts, Carragher proclaimed that he was like “Lecky Legs”, which sent the studio into laughter.

‘Lecky Legs’ – real name Mike Campbell – went viral back in 2016 when videos emerged of his incredible dancing skills in Liverpool’s pubs and clubs.

Attention then turned to the late goal that Richards scored to rescue a 1-1 draw in the Everton game.

His celebration involved him performing a cartwheel. Carragher and CBS host Kate Abdo then challenged him to recreate the move in the studio.

After initially refusing, Richards did return to the stage. He executed the cartwheel with precision and received a loud round of applause for his efforts.

And both Richards and Carragher received plenty of credit on social media as well. It really was incredible stuff – and it’d be great to see similar in the future.

Looking forward to Richards challenging Roy Keane to a cartwheel at the weekend.