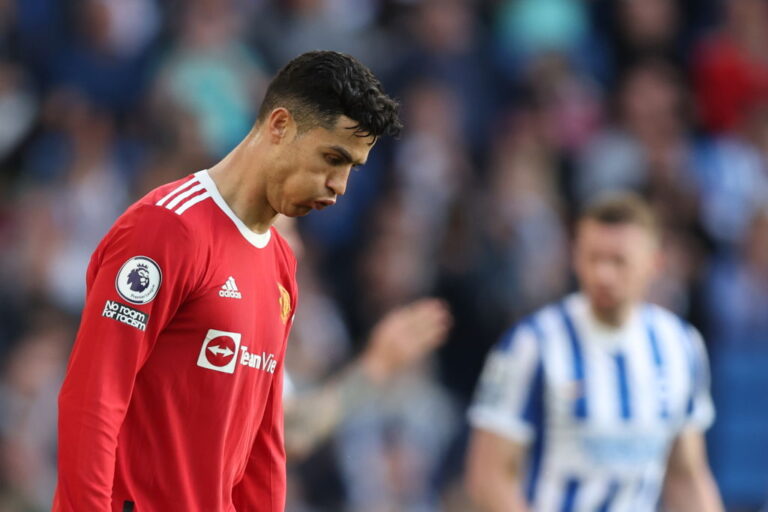 Former Manchester United defender Rio Ferdinand has given his thoughts on what Cristiano Ronaldo should do in the second season of his second stint at Old Trafford.

United’s famous number seven has been the standout player in a horrible season for the club. Ronaldo has notched 18 league goals – putting him third on the scoring charts. Meanwhile, United’s next highest contributor is Bruno Fernandes with 10 goals.

Not only that, but Ronaldo has also single-handedly carried Man United to victories on occasion this year. His impressive hat tricks against Spurs and Norwich typify the Portugal captain’s scoring ability. On a personal level, Ronaldo has captured two Player of the Month awards to recognise his performances.

However, despite his best efforts, Ronaldo cannot stop United’s current slide down the table.

The red side of Manchester suffered early exits from all cup competitions in 2021/22. To go with this, they have set some unwanted records. Their flagging league performance means that United will finish without silverware for the fifth straight season. It is their worst trophy drought for 40 years.

With only one game left in the Premier League, the Red Devils will also not be in Europe’s top competition next season. Their best-case scenario is a sixth-placed finish and Europa League football in 2022/23.

In addition, all this may signal the end of Ronaldo’s second stint at United. Speculation has linked Mr Champions League with a move away from Old Trafford. It has been suggested that a potential reunion in Spain with Real Madrid is on the cards.

However, the Portugal attacker said he would be happy to stay if incoming manager Erik ten Hag wanted him there. According to The Telegraph, the Dutch manager has Ronaldo in his plans for next season. And in even better news for United fans, ten Hag is not afraid to build a team around him too.

Upon this news, former United man Rio Ferdinand has offered some advice to his former teammate.

Speaking his the YouTube show, “Vibe with FIVE”, the former England international suggested that Ronaldo may have to change his mentality. Instead of targeting silverware, the forward should embrace the rebuild and view himself as a mentor for younger players.

“I just feel with Cristiano [Ronaldo], he’s always been known for winning, and every team he’s been at has been challenging for the top honours,” said Ferdinand (quotes via Manchester Evening News). “I think he’s going to have to change his mindset and leave a different type of legacy at this point in his career with Man United.

Read: Rio Ferdinand apologises to Jose Mourinho over his reaction to legendary quote

“It’s about working out what it’s going to be for Cristiano Ronaldo. Help the next manager integrate with the new team and new environment, helping with the young players and new players who come in the door. Be that experienced player that’s a shoulder to lean on.”

Ferdinand suggested that the United attacker should give up on his pursuit of trophies.

“Maybe shift his attention from glory and the trophies to really having that personal impact at the football club – it’s a bit different to what he has probably done before because it’s been trophy-led all the time.”

As such a serial winner, Ronaldo may find it challenging to heed Ferdinand’s advice fully. A summer full of transfer speculation surely awaits the Portuguese star and Manchester United.