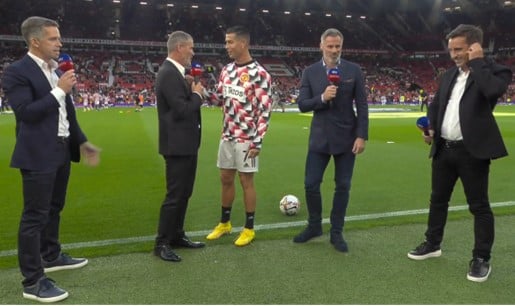 The Portugal international actually started on the bench for the Red Devils in their 2-1 win over Liverpool. He came on in the match’s closing minutes, with Erik ten Hag preferring Rashford and Martial as his forward options.

Because of his non-involvement at the start of the game, Man United’s No.7 was a lot more casual in his pre-match warm-up. As a result, he “gatecrashed” Sky Sports’ pre-match build-up, which was pitchside at the time.

Ronaldo greeted fellow Man United legends, Gary Neville and Roy Keane, shaking their hands in a friendly interaction. However, he gave Liverpool legend Jamie Carragher a frosty reception. Ronaldo walked straight past the pundit, nodding subtly at him in a very disinterested manner.

Man United fans on social media enjoyed the straight-up rejection that Jamie Carragher received from the Red Devils superstar. Among those to laugh at his expense was United legend Rio Ferdinand.

Taking to Twitter, the former defender could not hold back his laughter at the bizarre interaction.

Ferdinand shared a gif of Ronaldo’s actions with a caption full of laughing emojis.

“Cristiano Ronaldo absolutely blanking Jamie Carragher there!” he remarked. “Had you doing a 360 like the old days!”

As Rio Ferdinand alluded to, Ronaldo and Carragher regularly faced off against one another during the 2000s. And, overall, the Portugal captain had a winning record over Carragher during his time at Old Trafford.

Ronaldo had five wins in the nine matches where the pair played against each other. Meanwhile, Jamie Carragher picked up three with Liverpool, and one match ended in a draw.

However, Ronaldo has only scored twice against the Merseyside club in a Man United shirt. His first came in a 3-0 win at Old Trafford in 2007/08. Then, he scored United’s only goal as Liverpool thrashed their rivals 4-1 in the 2008/09 season.

Aside from on-pitch battles, Carragher’s views on Ronaldo in the past few months means that CR7 may not see eye-to-eye with the Sky pundit.

Jamie Carragher was never a fan of Ronaldo re-signing with Manchester United last summer, feeling that he was not a good fit for the club. As the Red Devils’ season faltered at the end of 2021/22, Carragher then said that the new manager should sell their star striker.

He has doubled down on this throughout the summer transfer window, too. On Saturday, Carragher stated that Ronaldo’s exit was necessary to allow United to start their rebuild.

Additionally, the Man United striker is probably not happy with where Carragher sits on the Messi-Ronaldo debate. Last year, the former defender chose Lionel Messi as the greatest player of all time, in his opinion. Undoubtedly, this is something that Ronaldo would remember as motivation.

Overall, it seems that Ronaldo and Carragher will not be best friends anytime soon.