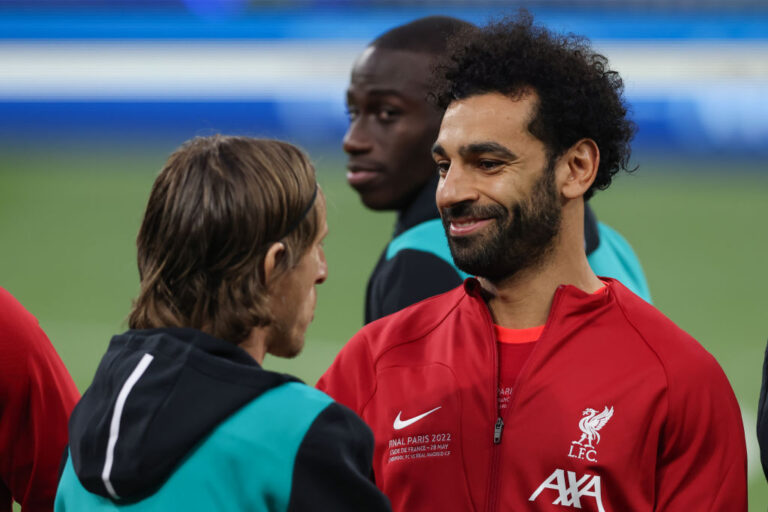 If losing the Champions League Final wasn’t bad enough for Mo Salah, he also had to deal with Luka Modric rubbing salt in the wounds after the final whistle.

Despite entering the match with an overwhelming sense of belief, Liverpool were not able to get the job done on the night in Paris.

The Merseyside club produced an impressive first half, and nearly found the back of the net on several occasions. However, it wasn’t enough. A Vinícius Junior goal, and a heroic goalkeeping performance from Thibaut Courtois, resulted in Real Madrid lifting the European Cup for the 14th time.

This left Salah devastated. Four years ago, in Kyiv, he exited the final in the 31st minute due to a Sergio Ramos-inflicted injury. This left him desperate to enact his revenge on the Spanish team.

Prior to the 2022 finale, the Egyptian said: “When we lost in the final, it was a sad day for all of us. But I think it’s revenge time.”

His statement showed he, and Liverpool, meant business. But the end result made room for one of the Madrid players to make a jibe in the 30-year-old’s direction.

Following the final whistle, Liverpool players’ heads dropped while the Madrid team leapt into the air in celebration. The players began to hug each other in jubilation. when Real winger Rodrygo overheard his team-mate say a few words to Salah.

In an interview with ‘Podpah Podcast’, per (quotes via ESPN Brazil), he revealed: “When the game was over, the Real Madrid players made a runner. Liverpool was passing by. Salah was going through a little sad, head down. Modric looked at him and said: ‘Thank you, Salah. Next time, you try again.’ I started laughing.”