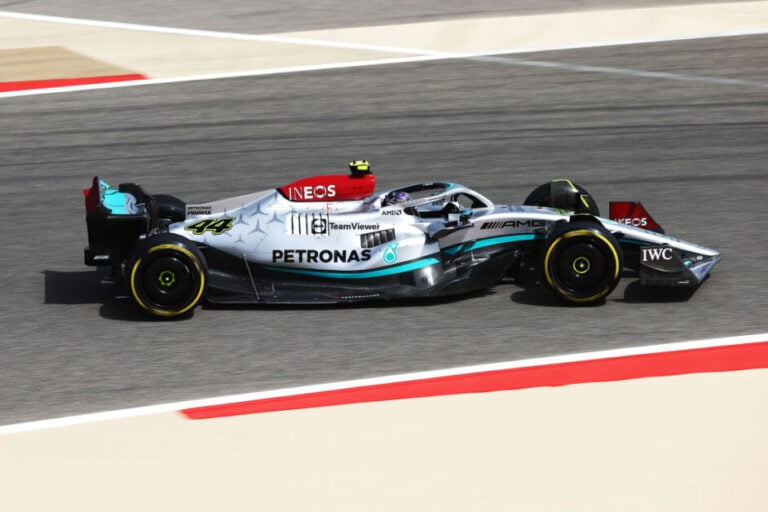 Formula 1 managing director Ross Brawn has expressed his view on the eye-catching new sidepod design on the Mercedes car.

A whole host of rule changes have had a massive impact on the design and style of F1 cars for 2022. Formula 1 changed the rules to try and make cars that can race closely with one another, relying on ‘ground effect’ aero to generate speed and downforce.

Sidepods, as a rather obvious element to the car, have caused a lot of talk in the paddock. Whilst containing radiators and being essential for cooling, sidepods also significantly impact the car’s aerodynamics. This has forced teams to get creative with their aerodynamics in need for speed.

This has prompted many different solutions this year. However, none have been as aggressive as what Mercedes have produced.

The reigning constructors’ champions caused quite a stir at the start of the second test. As their car left the garage, it revealed a radical sidepod design. They were essentially non-existent, leading some to question whether they could even be considered sidepods at all.

The aggressive design should increase the force of the ground effect aero, therefore maximizing downforce. To try and allay fears of overheating, the wild new Mercedes design has air vents cut into the side of the vehicle. In addition, the German manufacturer used fins to improve airflow to the rear.

Unsurprisingly, rivals of Mercedes took notice and had plenty to say on their ‘no sidepod’ machine.

Ferrari team principal Mattia Binotto was intrigued by it all. He explained (quotes via Eurosport): “The concept is quite different to ours [Ferrari], quite interesting with the cooling layout, and the sidepods look quite interesting.”

However, Binotto expressed concern over the position of the wing mirrors on the Mercedes. Mercedes mounted their mirrors on the big aerodynamic fins as part of the new look.

“On the mirrors, it was surprising. We were not expecting that,” he said. “We always said the mirror should have no aero purpose and the way they treated their car, there is a significant aero purpose to the mirrors.

“The risk in the future is all teams will start designing mirrors that look like spaceships. It is something we need to discuss.”

Meanwhile, Red Bull boss Christian Horner denied claims that he called the Mercedes car “not legal”. Instead, Horner decided to refrain from extensive comment on the matter.

On the topic of the Mercedes, he was vague: “It’s obviously a fairly different concept, but that’s for the designer guys and aerodynamicists to get into.”

Speaking to F1TV, Ross Brawn was surprised by Mercedes’ design.

He explained: “There’s no doubt that the Mercedes concept we didn’t anticipate, it’s a very extreme interpretation of the regulations. It is impressive.”

Brawn suggested that the FIA are happy that Mercedes’ car operates within the rules. However, he also said that teams might object to it.

“I think they [the FIA] are okay with it so far,” he said. “But of course, a team may come in and raise an objection that the FIA hadn’t considered. And then you have a problem.

“I’ve been through that many times where your idea is okay, the FIA agrees it’s okay. And then a team comes in with a perspective that has never been considered and have an argument that’s valid.”

“I’m sure there’s going to be lots of discussion about it,” the F1 boss continued. “But it’s impressive for a set of rules which everyone said was too prescriptive. We’re seeing all these solutions.”

If a team does lodge a complaint to the FIA about Mercedes and the sidepods get outlawed, new F1 rules allow technical rule changes to take place during the season. Before, rules could only be changed in the offseason.

For now, Mercedes can keep the ‘no sidepod’ look. Will it keep them ahead of their rivals? Only time will tell.

No doubt other teams will be watching Mercedes lap times very closely.