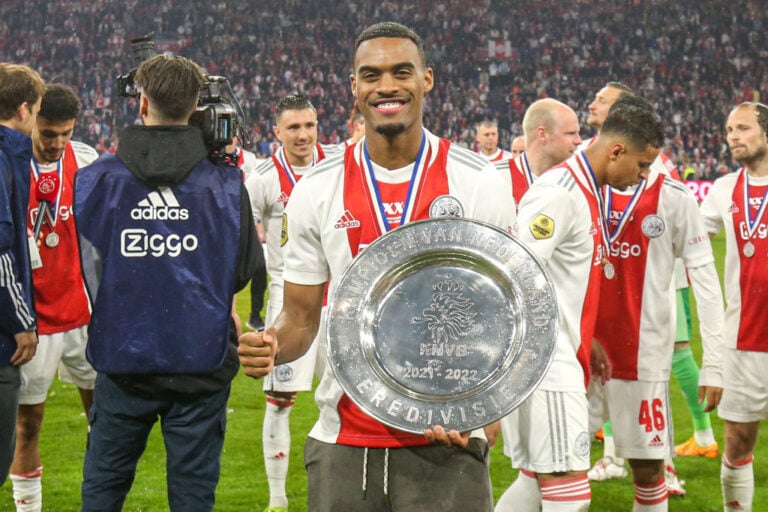 Dutch international Ryan Gravenberch has finally confirmed his transfer to Bayern Munich, revealing why he turned down Man United in the process.

Unfortunately, missing out on the midfielder is another setback in Erik ten Hag’s Red Devils rebuild.

Man United’s new manager is eyeing up a raid on his former side to turn around the club. Speculation suggests that he is looking to steal several players from Ajax.

To bolster United’s defence, the new boss wants two of the Amsterdam side’s centre-backs. Defensive duo Lisandro Martinez and Jurrien Timber are on ten Hag’s shopping list. Highly rated in the football world, the pair were critical components of Ajax’s stingy defence in 2021/22.

As a result, both players command quite a significant price tag. For instance, Ajax value Timber at a hefty £43 million, according to The Guardian.

Additionally, Man United have been heavily linked with a move for Barcelona midfielder Frenkie de Jong. The Dutch international worked with Erik ten Hag in the Netherlands before moving to Spain in 2019.

Barcelona want a significant transfer fee to part ways with De Jong. Last week, United had a bid of €60 million, plus €10 million in add-ons, rejected for the Barca midfielder.

The midfield area is a key concern for Manchester United. They have released Nemanja Matic, Paul Pogba, Juan Mata, and Jesse Lingard after their contracts expired. And, thus far, their transfer market pursuit of replacements has proved fruitless.

Now, Red Devils fans have learned that they have missed out on another potential signing.

The Dutchman will reportedly move to Bayern for just €25 million. Gravenberch will sign a five-year deal that will run until June 2027.

The news is a blow for Erik ten Hag and Manchester United; according to Metro, Gravenberch was a target of the Old Trafford side. Ten Hag is a fan of Gravenberch, having worked together at Ajax. Under the Dutchman’s management, the pair won three Eredivisie titles and two Dutch Cups.

Bayern Munich’s newest signing is yet another player to fall from Man United’s clutches.

Speaking to De Telegraaf, Ryan Gravenberch revealed that a last-minute attempt from Man United fell through as he had already confirmed his arrival to Bayern.

“Man United is a very big and nice club,” said the 20-year-old, via Daily Mail. “But I already had such a good feeling at Bayern, and I had given them my word.”

Gravenberch then explained further details of his transfer and decision.

“I like the fact that Nous [Noussair Mazraoui] is going there too. It’s always nice when you already know someone. My mother will come to live with me in Munich. And my father will be here a lot to take care of all kinds of things, so that I can fully focus on football.”

Bayern announced the signing of Ryan Gravenberch’s Ajax teammate, Noussair Mazraoui, at the end of May.

Maybe if United had managed to capture one of his teammates, Gravenberch would have moved to Old Trafford. But for now, the Red Devils will focus on securing Frenkie de Jong.