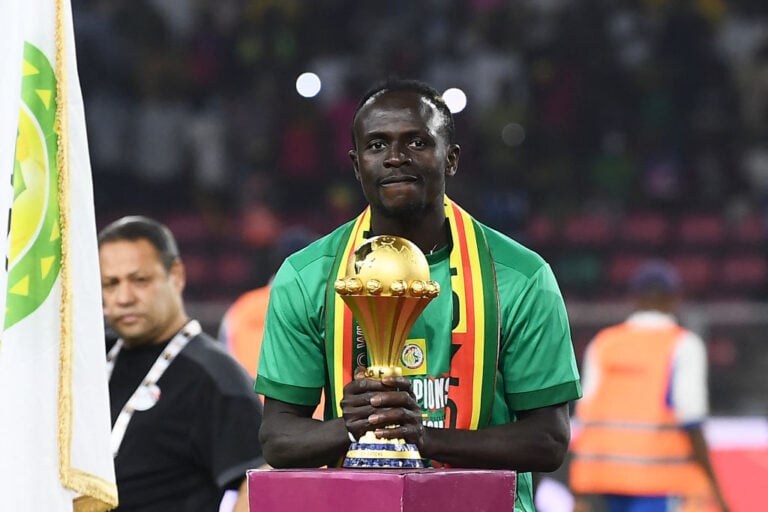 Bayern Munich winger Sadio Mane has said he wanted to sign an extreme ‘death contract’ with Senegal during the Africa Cup of Nations in January 2022, after he suffered a concussion in the round of 16.

Mane was representing his nation against Cape Verde when the incident happened. The winger suffered a clash of heads with Cape Verde goalkeeper Vozinha.

Vozinha was sent off, and Mane remained on the pitch for a short time. The winger opened the scoring for Senegal before leaving the field of play, looking rather groggy.

The winger was taken to hospital after his face began to swell. Mane developed a concussion from the clash, and Senegal were criticised for keeping him on the pitch after the initial incident.

Now, more information has emerged about the incident and the 30-year-old’s determination to be fit for the quarter-final against Equatorial Guinea.

Insistent on representing his nation in the match, Sadio Mane has revealed that he wanted to sign a contract which would see him take responsibility if he died on the pitch.

Mane was desperate to play the quarter-final, even if he had not recovered from his concussion by that date.

Liverpool insisted that the winger got five days’ rest, as per concussion protocol, but Mane was determined to play a part for his nation.

Speaking to Pro Direct Soccer France (quotes via Goal), Mane revealed that he rang the Senegal president, urging him to grant his wishes.

He explained: “I said, ‘I know I shouldn’t play, but let us have a contract. It will be my responsibility, I will sign. If I die, they have to say it is my fault. No one’s fault’.

“‘They said, ‘Sadio, you cannot play’. But I said, ‘No, no, it is out of the question’. It was around 1am or 2am. Everyone panicked, and I said, ‘Coach, I know even you are scared. Just write a letter that says I played voluntarily in case I die or whatever happens’. Everyone was tense.

“I did not sign the paper, but they finally said, ‘No, no it’s not possible’. But I was ready to do it, so the doctor said, ‘Okay, let us do a scan in the morning, the day of the match’.”

Why did Mane play?

The winger did not sign such a contract, but he did play against Equatorial Guinea.

The doctor conducted scans of Mane’s brain, and found no signs of concussion. They declared Mane fit to play.

The 30-year-old started the quarter-final and ultimately led his nation to an AFCON triumph. The Senegalese icon even scored the winning penalty in the final against Egypt.