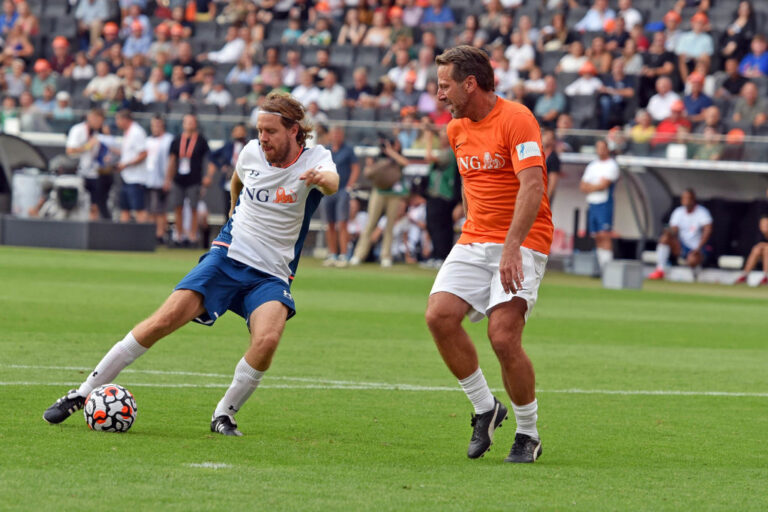 Sebastian Vettel showcased his football ability at the “Champions for Charity” match in Frankfurt on Wednesday, scoring twice in a star-studded game.

The four-time F1 Drivers’ Champion was one of many big names to feature in the charity match raising funds for two foundations. Vettel and fellow F1 driver Mick Schumacher captained one team, which represented the Keep Fighting Foundation, a charity set up following Schumacher’s legendary father, Michael, suffering a severe head injury in a skiing accident in 2013.

On the other team, NBA icon Dirk Nowitzki and Borussia Dortmund defender Mats Hummels led a squad playing for the German basketball figure’s own foundation.

The game has been played for a few years, honouring Michael Schumacher.

Aside from the match, which had over 15,000 people in attendance, United Charity also held a number of auctions in support of the event. Some unique experiences were up for bidding, including a meet-and-greet with Nowitzki, his signed shirt from the game, and a signed Mick Schumacher cap.

However, the real show was the sportspeople testing their skills on the football pitch.

Who played in the charity match?

Many of Germany’s best sporting stars featured in the game. Football was unsurprisingly well-represented to keep a certain level of standard to the event. For instance, World Cup winners Lukas Podolski and Sami Khedira both played. Timo Werner was meant to join the game too, but, unfortunately, had to miss out.

Finally, the sport’s CEO, Stefano Domenicali, also showed out at the entertaining event.

But Sebastian Vettel overshadowed them all, using his lesser-known football skills to bag a memorable goal.

Despite the match finishing 11-10 to Mick Schumacher’s team, Sebastian Vettel is the man with a goal going viral.

Taking on the last defender for the “Nowitzki All-Star” team, the Aston Martin ace cut inside. Then, just in front of the penalty spot, Vettel unleashed a cleverly disguised shot.

This wrong-footed both the goalkeeper and defender, his shot nutmegging the outfield player before rolling into the bottom corner.

The goalkeeper, German international Kevin Trapp, could only smile as the wily F1 champ celebrated the smart finish with his teammates.

Not to be outdone, Mick Schumacher also got in on the scoring act at the Champions for Charity match. The Haas driver bagged a hat-trick, one-upping his fellow German F1 driver. Vettel’s two-goal haul is still impressive, though.

Unfortunately, on the opposing side, Dirk Nowitzki could not get on the scoresheet. Operating as a goalkeeper and coach, the NBA legend did have the chance to grab a goal via a penalty. But sadly, former Germany keeper Rene Adler saved Nowitzki’s spot kick.