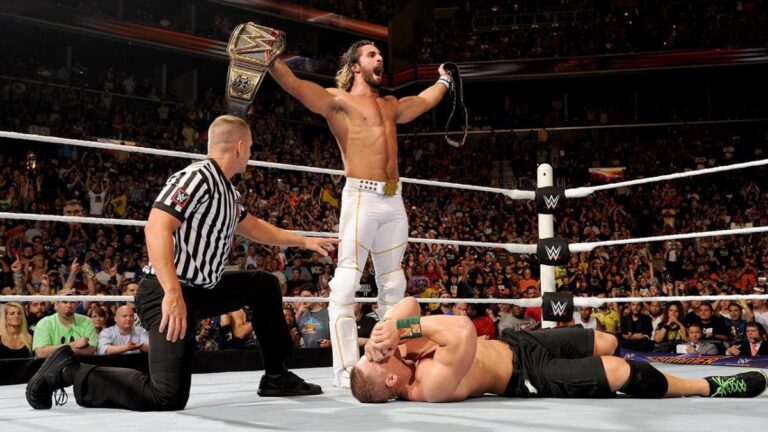 Seth Rollins has opened up about the “whirlwind” that was his 2015 SummerSlam match with John Cena.

Speaking exclusively with Sporf & Inside The Ropes’ Kenny McIntosh, The Architect recalled how he was surprised at the crowd reaction he received upon even making his way to the ring.

“That SummerSlam was really surreal for me. I don’t know that I thought the crowd was going to be as invested in me at that point as they were. I think the gear obviously was very striking and added to kind of the excitement level of when I walked out that way, no-one had really seen me in anything but black up until that point. And so it really kind of popped pretty well.”

Rollins, who would emerge as a double champion that night, spoke about the match being equally surreal, and dream-like.

“The match itself, you know, the athleticism and the physicality sort of speaks for itself. And then at the added element of Jon Stewart at all, it all felt very surreal and as if it happened in a dream or as if I was watching it happen to somebody else. Even the idea of being a double champion I almost didn’t think was possible. It wasn’t anything that I even considered yet.”

Rollins had won the WWE Championship at WrestleMania that year, before adding the United States Title, almost as the underdog – as anyone really is when facing John Cena. Aside from maybe his opponent this year – Roman Reigns.

“I remember I was just a few months removed from winning my first championship in a pretty epic fashion at WrestleMania. So, I mean, I was still riding that wave. So busy, so much going on in my life, I didn’t really have time to to kind of sit back and enjoy what was happening. Now, in retrospect, obviously, I can look back at it. But what what a whirlwind that was, man.”