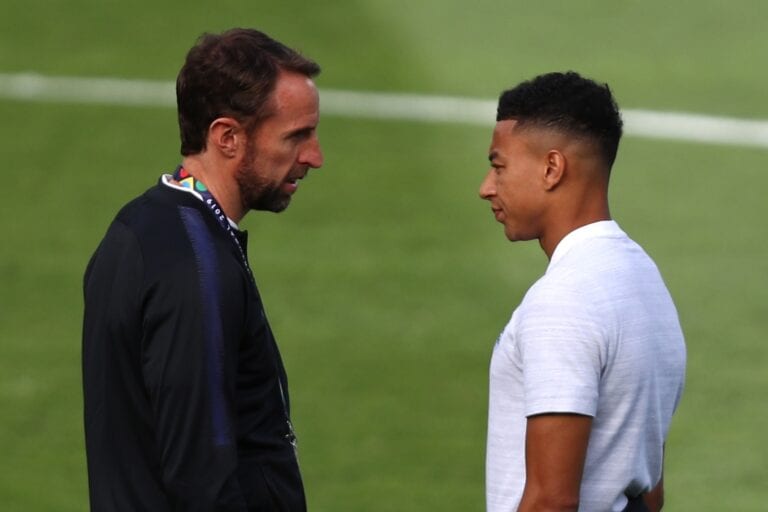 England manager Gareth Southgate has explained the logic behind Jesse Lingard featuring in the Three Lions’ friendly against Austria tonight.

Lingard, who enjoyed a strong end to the season with West Ham, wasn’t part of the 26-man squad announced by Southgate for this summer’s Euros. Despite that, Lingard is expected to start in Wednesday’s showdown with Austria at the Riverside Stadium this evening.

During his squad announcement press conference, Southgate spoke about the decision.

“He [Lingard] will play tomorrow because we’ve got Sancho ill and a lot of players not available and, for the balance of the team, he will start. He deserves that opportunity to go and show me that I’m wrong,” Southgate said.

“The lads that are with us are the standby list and we need to keep them match-ready.

"He deserves the opportunity to show me that I'm wrong."

Gareth Southgate says Jesse Lingard is unfortunate to miss out on selection for his 26-man squad for Euro 2020 and the midfielder will start for England in their friendly against Austria on Wednesday. pic.twitter.com/aX7NxaF6GL

“Everybody wants to play and that can affect our decision making in these two matches and the training sessions in the lead-up.

“We have got a very good idea of what we want to do, but that’s always got to be open to change – and that’s the opportunity the players have in the next two games.”

Lingard featured for England at the 2018 World Cup and scored a memorable goal in the 6-1 win over Panama.

“Jesse has done incredibly well to get back in the race. Going back to January, he was a million miles from being selectable for an England squad.

“I said in March that he had a fabulous few weeks, but you’d have to say he was a little fortunate because we were without four wide players at that time.

“He had a good spell with West Ham and is a player that has played so well for England. We have total trust in the way he plays: he’s reliable and a great member of the group.”

Tonight’s game against Austria kicks off at 8pm with England going on to face Romania this Sunday.