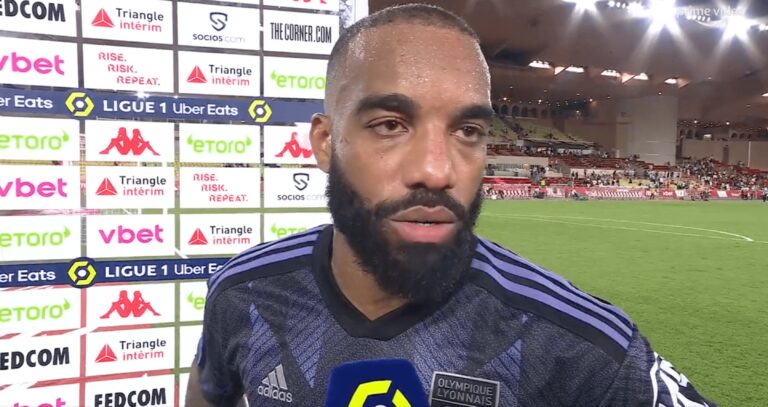 Last week, Alexandre Lacazette went viral for speaking in a very high-pitched voice during an interview. And now we’ve got some much-needed context.

In the aftermath of Lyon’s 2-1 defeat at the hands of Monaco, the ex-Arsenal star graciously gave his time to the media. Since rejoining his boyhood club, the striker has looked back to his best scoring, four goals in seven Ligue 1 games.

But despite his ascent back up the footballing mountain, football enthusiasts focused on how he sounded after the final whistle blew.

The 31-year-old left fans completely confused. But now we know why he was talking in the manner he was.

Why did Alexandre Lacazette have such a high voice in his interview?

Lacazette will undergo surgery to get rid of a small growth on his vocal cords, which has caused a change in his voice.

As per L’Equipe, the forward has been finding it difficult to speak since the start of the summer due to a polyp. The Frenchman has reportedly struggled to deal with the severe pain, but decided to push through and wait until the international break to have the operation.

The surgery will reportedly take place next week and, subsequently, Lacazette will need some time to rest. He will take several days off before making his return to training. However, Lyon still have one huge game to play before the break. They collide with Ligue 1 champions, Paris Saint-Germain, in one of the biggest games of the season.

Consequently, the natural-born goalscorer will want to make sure he is available. After an eighth-place finish in the league last season, Lyon aim to redeem themselves by bagging a place in the top three to secure a Champions League spot.