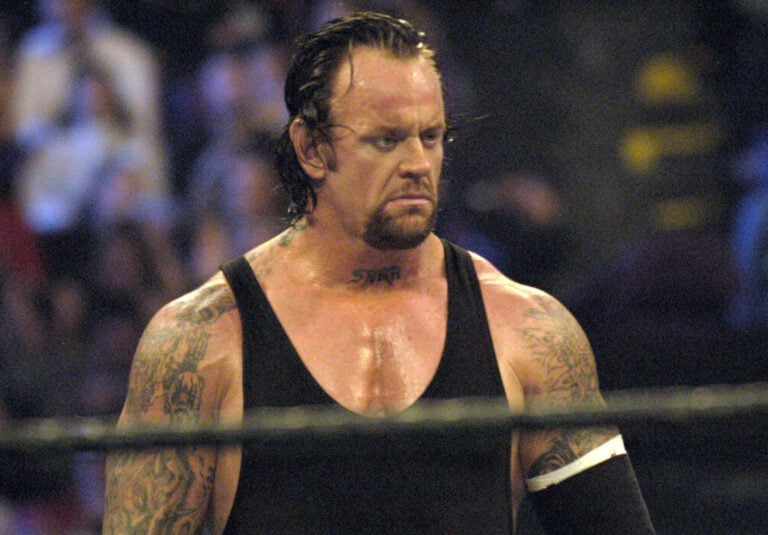 Whenever WWE fans think of WrestleMania, two of the first topics that come to mind are The Undertaker and his famous streak.

‘The Phenom’ competed at WrestleMania for the first time in 1992, defeating Jimmy ‘Superfly’ Snuka. From there, what began as a young competitor building his way up the WWE ranks became the talk of WrestleMania. Every year, fans asked the same question – is this the year someone will break The Undertaker’s streak?

For 21 years, the answer was a resounding no. Shawn Michaels, Triple H, Ric Flair and CM Punk were amongst the wrestlers to try and fail to end the streak. Michaels lost twice. The second defeat cost him his career.

But the streak was finally ended in shocking fashion by Brock Lesnar at WrestleMania 32. And when we say shocking, we mean an entire arena descending into gasps as the referee completes his three-count. Fans stood open-mouthed as one of the most significant records in professional wrestling came to an end.

The Undertaker would not stop there, however. Matches against Roman Reigns and John Cena were in store before ‘The Deadman’ finally hung up his wrestling boots in 2020 after defeating AJ Styles.

In honour of The Undertaker’s legacy, we’re taking a look at five of his most iconic WrestleMania matches, ranked:

In what proved to be the final match of The Undertaker’s historic career, he defeated AJ Styles in a Boneyard Match.

Due to the Covid-19 pandemic, WWE had to get creative. They put on a superb cinematic showing, featuring eerie background music and special effects. In addition, Undertaker reverted to his legendary ‘American Badass’ character for one final time. It wasn’t the wrestling match that most anticipated, but the uniqueness of the match ensures it ranks highly.

As it turned out, ‘The Deadman’ bowed out by burying his opponent before riding off into the sunset. A fitting way to end.

Seasoned veteran against future WWE legend. This one had all the makings of a classic.

By 2005, Randy Orton was rapidly ascending the WWE ladder. In August 2004, he became the youngest World Heavyweight Champion in the company’s history. He also began referring to himself as the ‘Legend Killer’.

As a bonafide WWE legend already at this point, The Undertaker’s WrestleMania streak remained unbroken. But Orton wanted to end it. At WrestleMania 21, he attempted precisely that.

In a match that lasted 15 minutes, Orton nearly pulled off the most significant victory of his career. After interference from his father Bob, and an incredible counter into an RKO, Orton forced a near-fall. But The Undertaker got to his feet and landed a Tombstone Piledriver to extend the streak to 13-0.

When Shawn Michaels took a rematch against The Undertaker at WrestleMania 26, he knew that his career would be over if he lost.

Michaels hit Sweet Chin Music on his opponent onto the announce table before nailing a moonsault to send The Undertaker through a table. However, once they got back into the ring, ‘The Phenom’ took control.

HBK showed great heart to kick out of the Tombstone Piledriver once more, but by then, his career appeared to be numbered. After enraging ‘The Deadman’ with a slap to the face, Michaels was driven to the mat again. This time, he would not kick out before the three-count.

When The Undertaker took on Triple H at WrestleMania 28 inside Hell in a Cell, carnage was guaranteed.

It was Triple H who controlled most of the early proceedings. He delivered a series of sickening chair shots before grabbing hold of his infamous sledgehammer.

Special guest referee, Shawn Michaels, even tried to stop the match at one point. He also pushed Triple H to the floor when he attempted a sledgehammer shot to the head, which enraged ‘The Game’.

Somehow, however, as always, The Undertaker found a way. After delivering chair shots of his own, he unleashed the Tombstone Piledriver to extend the streak to 20-0.

Arguably the greatest WrestleMania match of all time. Throughout its entirety, fans were on the edge of their seats. Fans asked the question at a higher pitch than ever – will Undertaker’s streak be broken?

When Michaels landed Sweet Chin Music on Undertaker’s jaw, after 27 tension-filled minutes, that question appeared to be answered. As HBK went for the cover, the pinfall seemed a formality. Undertaker looked down and out.

But it wasn’t over. ‘The Phenom’ kicked out. Michaels threw everything at him, but he was unbeatable. After catching HBK in mid-flight, Undertaker drove his opponent to the mat to record his greatest WrestleMania victory.