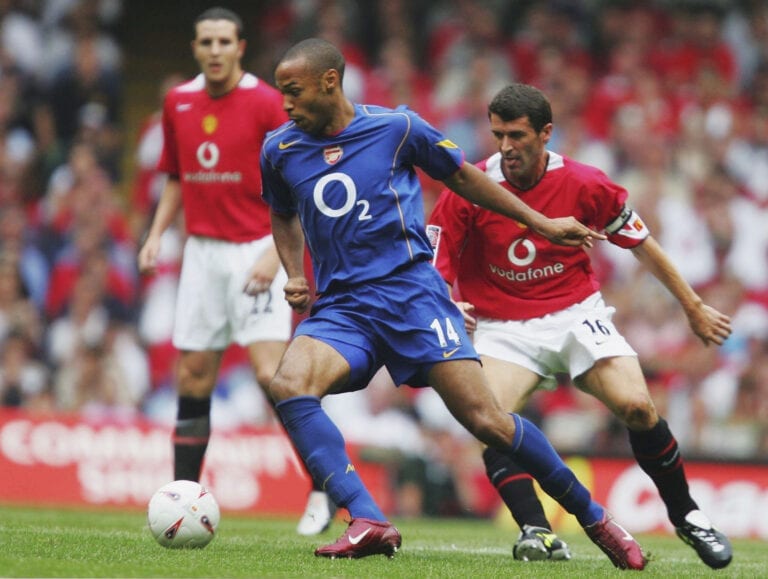 Thierry Henry has named his personal choices for the next six spots in the Premier League Hall of Fame – and they include two of his title-winning team-mates.

The Arsenal legend, who himself was one of the first two inductees into the Hall of Fame alongside Alan Shearer last week, was a guest on Monday Night Football where he chose six players who he believes should be inducted next.

He selected Dennis Bergkamp and Patrick Vieira – both of whom were part of the Arsenal ‘Invincibles’ side – as well as three Manchester United players.

On Bergkamp and Vieira, Henry said: “[Bergkamp] always wanted to do more, first in training, last in training, doing what the game was always asking him to do.

“People always remember Patrick tackling someone or arguing with someone. For me, he’s the only guy that could have played alone in midfield.

“And the quality. Sometimes Patrick was doing it on purpose to lift the ball, flick it over people and just passing by them.

“He was just unplayable at times and I don’t know a lot of people that could have done everything in midfield.”

On Cantona, he laughed: “He was very French wasn’t he? His collar up, his goals, his attitude, the way he scored goals.

“For us [in France] it was the beginning of everything. I’m not saying we didn’t know so much about the Premier League but it wasn’t very well televised. But when he went there, we thought: “Wow, what a league. Fans, atmosphere, Cantona.’

“I mean, a French guy that goes and plays for Manchester United, and your nickname is ‘the King’?

“When you know the history of the club, I was like: ‘Wow. I want some of that’.”

On Keane, he said: “What a player he was. He could pass the ball, he could score goals.

“I was in the stand when he scored that header in Turin to bring the team back in the semi-final of the Champions League [in 1999] because I couldn’t play.

“I was like: ‘Wow’. The way he brought his team back into the game, the way he battled in midfield, the way he could galvanise everyone and make them play better by just who he was.”

On Scholes, Henry discussed how he stood out in the great United teams of the late 1990s and 2000s.

“Every time we played [United], we wanted to stop him,” the Frenchman said.

“He was making the team tick. In that team.

“We were scared of him. I’m not saying we were not scared of the others, but him first and foremost.

“Let’s stop him. If you stop him, you stop a lot of Manchester United. That will speak volumes about that because they had a great team.”

“He won the whole lot with Chelsea.

“When you work hard, you get your reward, and that’s a great example.”