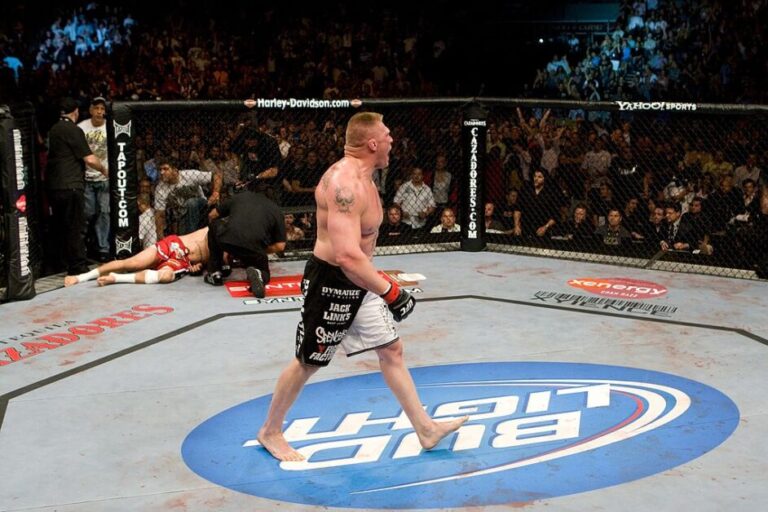 Brock Lesnar is an absolute freak of nature. And this holiday season, he could help you shift your annual holiday weight.

The festive period is a time for giving gifts, relaxing and eating as much food as possible. But the ‘Beast Incarnate’ won’t be indulging in pigs in blankets anytime soon, as he has a massive contest coming up on January 1.

At the Day 1 PPV in Atlanta, Georgia, the eight-time world champion will look to solidify his legacy in one of the biggest matches of his career. He challenges Roman Reigns for the Universal Championship in what should be a battle for the ages.

Therefore, his Christmas period will be spent running, lifting weights and drinking protein shakes. Not exactly the most traditional way to enjoy the celebrations, but if he wants to win the match, he has to do it.

Although this sounds like a huge sacrifice, this level of exercise is rewarding for athletes. Some of you may even feel motivated by his training regime. So as a seasonal treat, here’s how you can work out like one of the world’s finest sportsmen.

‘The Beast Incarnate’ earned his famous nickname for a reason. His incredible seismic strength and power blend gives him an almost supernatural aura. There are very few men alive who can match his unbelievable athleticism.

But what does he do every day to get there?

We’ve examined a promo from early in his WWE career that presents Lesnar as a Rocky Balboa-type who made use of his environment. Perhaps it’s embellished somewhat to push his natural persona, but we’re going to take it quite literally.

Firstly, he stresses the importance of mentality. You have to feel like you’re the best in the world to perform to your maximum potential. In addition, Lesnar claims that you have to think outside of the box. Growing up in a rural area, he didn’t always have time to go to the gym, so he utilises what he’s got around him.

The only good way to start off the perfect workout is by performing a solid warm-up routine. Typically, the WWE Superstar begins his sessions by doing push-ups on sticks. The spartan-like exercise is ideal for hitting various muscles, including the chest, shoulders and back.

In addition, the exercise is perfect for building flexibility. Lesnar is renowned for his physical presence. But this drill contributes to his overall in-ring ability and explains how he became a well-rounded wrestler.

The step-up exercise with weights on your back is part of a regular workout routine. The practice is perfect for building explosive power in the lower body, particularly the quadriceps, glutes and hamstrings.

Leg muscles are of paramount importance for power-based performers like Lesnar. But like many athletes, he tailors the drill to his particular needs.

The WWE Superstar simulates the strength required for his iconic F5 by carrying a log around.

Of course, you can substitute these for sandbags if those are more readily available. But for all upcoming professional wrestlers, exercises like these are necessary if you want to create a realistic drill to help with your performances.

Lesnar may have a plethora of skills at his disposal, but everyone knows what his biggest asset is: Power.

The multi-talented athlete hasn’t only earned his sporting success through his wrestling career. Remarkably, he also reached the pinnacle of MMA by becoming a UFC champion. It won’t come as a surprise what the next part of his workout is.

The 43-year-old focuses on cardio and his punching power by hurtling punches towards the heavy bag in an explosive fashion.

Going stale is one of the worst possible things for an athlete. If they begin to lack motivation, then they will likely train less and develop a defeatist mentality. Sportspeople perform to their best when they are happy.

If he gets bored using the floor, he will perform press-ups using chairs. The drill not only provides him with something different but allows him to push that extra bit more profound, which develops his pectoral muscles even further.

As a competitor rises through the ranks, the level of coach they have access to rapidly improves. They can train alongside the best strength and conditioning coaches on the planet and learn the best possible exercises. However, some of the best drills available are taught before any of this becomes available.

During his younger years, Lesnar learnt an exercise in which he utilises rapid movement to improve the strength in his hips. The Beast Incarnate is the killer he is today because of the work he put into his amateur wrestling career. The speed and agility he developed on the mat allowed him to become a ferocious athlete capable of picking up world titles in two separate sports.

Resistance training improves muscle strength, protects joints from injury and improves balance. So it’s no surprise that Lesnar chooses to finish his session with this style of exercise. For his final drill, the 44-year-old performs normal movements with resistance, which helps his hip speed and improves his ability to fend off an opponent who is trying to resist.

Recovering from your session is just as important as doing it in the first place. Your muscles need to relax and repair themselves, or damage is likely. Lesnar chooses to recover by using an ice bath. Not only does this prepare him for the next day, but it also provides one final mental challenge.

He sits in the freezing water for ten minutes without getting out, which ultimately helps him in the ring. When his matches get tough, and he’s got nothing left to give, he’s still capable of pushing himself through the fire.

What is his secret for success?

Brock Lesnar is one of the greatest combat sports athletes of all time. Any advice he has to help a competitor reach their maximum potential can only be beneficial.

The legend stresses: “I’ve always got the mindset of beating my opponent. Repetition is for my opponent. I’ll do one more for him. I train like a mad man all year long. It makes me that much better. Outdo my opponent. Always.”

If you want to better yourself in 2022, then why not take the words of wisdom of the Beast Incarnate and start right now?